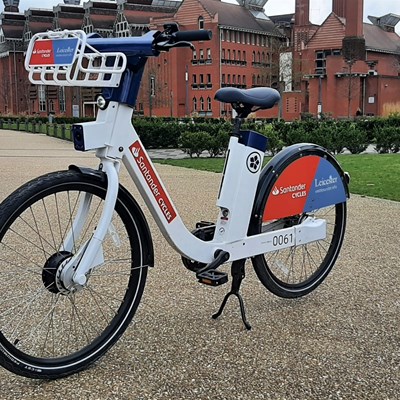 LEICESTER residents, commuters and visitors are being encouraged to sign up for a new ebike hire scheme by 17 May if they want to take advantage of an introductory trial offer.

Santander Cycles Leicester, which launched to everyone on 14 April, has been running a discounted offer where people can sign up to use the scheme for just £1.20 for a 30-day membership plan, with hire rates starting at 60p for the first 30 minutes.

The offer has been hugely successful, with more than 5,000 people (5,102) registering with Santander Cycles Leicester and 8,963 trips made since 14 April.

The last day that people will be able to buy a 30-day plan at the trial price is Monday 17 May. After that date, prices will change.

If you sign up on or before 17 May, you will get 30 days of membership to the scheme for £1.20, plus pay any applicable hire rates when you use a bike, with hire rates starting at 60p for the first 30 minutes.

Under the new pricing structure, which begins at 8am on Tuesday 18 May, occasional ‘pay as you go’ users of the scheme will pay £1.20 to unlock a bike, plus hire rates then starting from £1.40 for 20 minutes of hire time.

People who buy yearly or monthly membership of the scheme won’t need to pay to unlock a bike and the hire fee will start from 60p for each 20 minutes of hire time.

Yearly memberships will cost £60 and monthly membership to the scheme will be £12. Students will be able to join the scheme for a whole year for just £30, and there will be special membership rates for other concession groups.

Deputy city mayor Cllr Adam Clarke, who leads on environment and transportation, said: “The response to our new bike share scheme has been fantastic. As soon as people started seeing docking stations for the bikes appearing on our city streets, they wanted to find out more.

“Our trial offer, designed to build on this early interest in this scheme, has been hugely successful. We now have a total of 6,129 people registered with Santander Cycles Leicester, 5,000 of which have signed up since 14 April.

“I’m confident that lots of people will continue to use Santander Cycles Leicester to get around now that they know how the scheme works. It is extremely affordable, as well as being easy, convenient, good for your health and better for the environment.”

Once fully operational over the summer, Santander Cycles Leicester will feature a fleet of more than 500 cycles and 50 docking stations, making it the largest docked e-bike share scheme in the UK.

The scheme began running for testers in January, before opening up to wider use last month to coincide with the easing of lockdown restrictions.

The £600,000 project is being funded by a partnership made up of Leicester City Council - following the council’s successful bid to the Department for Transport’s Transforming Cities fund – with sponsorship from Santander UK and additional investment from the operator, Ride On, and their delivery partner Enzen Global.

Leicester City Council has a package of nearly £80million, including funding from the Government's Transforming Cities Fund, to spend on a range of major projects. As well as the bike share scheme, these include developing better walking and cycling links and upgrading to electric park and ride buses.

An official launch event for Santander Cycles Leicester is being planned as part of National Bike Week, which runs from 30 May-5 June.

Visit www.rideonleicester.com for more information and to join the scheme.