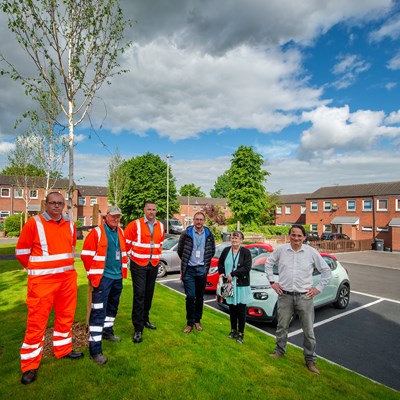 NEW car parking spaces, cutting back shrubs and tidying up overgrown green spaces are among the improvements that have been made to a city estate after residents told the council what they’d like to see done.

Gees Lock Close, in the Gilmorton estate, has benefitted from £90,000 of improvement work, funded from Leicester City Council’s environmental budget. As part of the work, eight new parking spaces have been created.

It’s just one example of a range of improvement projects earmarked for completion across the city’s estates this year. Six further improvement schemes will be carried out on estates in the south of the city, seven to the west of the city and eight to the east.

Other work that has already been carried out on the nearby Eyres Monsell estate has seen overgrown garden areas tidied and cleared around Rupert House, Pasley Road and Henray Rise. The estates landscape team is continuing to carry out additional maintenance work to tidy up and cut back overgrown areas in the south of the city, making them safer and better places for people to live.

Examples of further projects that will take place later this year and early into 2023 include a larger parking scheme on Ivychurch Cresent, in Netherhall; verge hardening on Tatlow Road, in Braunstone Frith; and flooding prevention on Donaldson Road, Belgrave.

In total, the improvements will cost more than £800,000 and will be carried out in addition to the council’s usual round of maintenance work.

Ideas for the projects were sought from tenants, residents and ward councillors. Housing staff have also highlighted improvements that could be made, based on their local knowledge of issues on estates.

Residents of Gees Lock Close on the Gilmorton estate approached one of their local ward councillors, Cllr Adam Clarke, about problems they were having accessing parking in this area. “I was happy to put forward the creation of additional parking spaces as a key priority for estate improvements in the area,” Cllr Clarke said. “Not only is this in my ward, but it also relates to my responsibilities as deputy mayor for environment and transport. The finished work is a vast improvement and I’m very pleased that residents are happy with it.”

Assistant city mayor for housing, Cllr Elly Cutkelvin, said: “We are bringing about a whole programme of improvements across the city. Some of the initiatives we’re undertaking are as a result of issues highlighted on estate walkabouts, at ward community meetings, or requests from tenants and residents. We want our estates to be safe, pleasant places for people to live in.

“This budget is funded by the housing revenue account – money we collect in rent – so it’s being reinvested in the sort of improvements that tenants want to see.”

Jayne Clarke, who lives in Gees Lock Close, said: “The new parking spaces have made a massive difference. It’s so much easier to park now and access for deliveries and visitors is a lot easier too. People used to have to turn their cars round on other people’s driveways, but that doesn’t happen anymore. It’s been a really good scheme.”