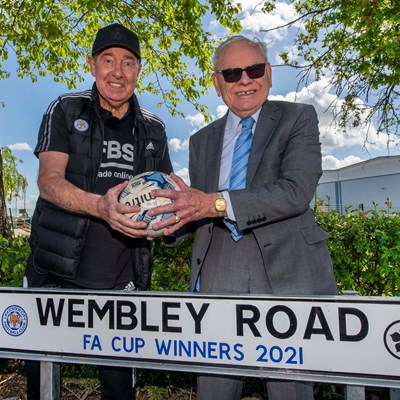 A COUNCIL employee’s idea to name a new Leicester street ‘Wembley Road’ as a good luck omen ahead of the 1969 FA Cup Final finally paid off – more than 50 years later.

David Edwards (pictured right) was an engineer in the former City Engineer’s department when he suggested that the new road on a Leicester industrial estate was named after the famous old stadium to wish Leicester City luck, ahead of their 1969 Wembley showdown with Manchester City.

The ‘Wembley Road’ street signs went up in early 1969, just weeks before the big day on 26 April.

But the hopes and dreams of thousands of Leicester fans were dashed that day, as the Foxes lost the game 1.0.

David, and Leicester fans everywhere, had to wait 52 years before their team made it to an FA Cup final again – but finally, in 2021, the Foxes brought the FA Cup home after a thrilling 1.0 victory over Chelsea.

“Back in 1969, I was responsible for the design, construction and naming of several roads on a new industrial estate at Braunstone Frith,” said David.

“A nearby road was called Golf Course Lane, and I thought it appropriate that the new road names should continue with the sporting theme.

“I immediately thought of ‘Wembley Road’, as the whole city was buzzing with excitement about a trip to Wembley – and no one was talking about anything else.

“Unfortunately, as everyone knows, we lost that game in 1969.

“But after Youri Tielemans scored that amazing goal at Wembley last year, I wrote to the City Mayor and asked him if the street signs could be adapted to commemorate the victory, as the traditional open top bus tour with the cup wasn’t going to be possible because of Covid restrictions. To my delight, he agreed.”

“Winning the FA Cup for the first time in their history was a massive achievement for Leicester City and a huge day for City fans everywhere,” he said.

“When David contacted us, our highways team got to work straight away. The new signs will make sure that everyone driving down Wembley Road will be reminded of that magic day in 2021 when Leicester won the cup.”

Leicester City club ambassador Alan ‘Birch’ Birchenall (pictured left) said: “Winning the FA Cup was fantastic for the club and the fans – and it captured the imagination of the whole city.

“The players who won the cup already have their names on Leicester’s fleet of electric buses, and now we’re delighted that the club’s FA Cup success will be remembered forever on these new street signs.”

The Birch joined David Edwards to unveil the new sign today (Tuesday 10 May).