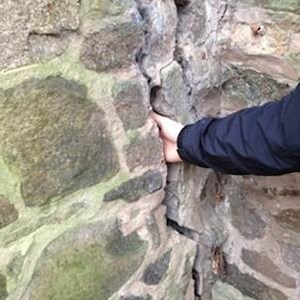 URGENT work is being carried out to remove trees that are in danger of causing permanent damage to an ancient scheduled monument on Leicester’s Abbey Park.

A stretch of the ancient abbey precinct wall – which stands inside the park between the abbey ruins and the River Soar - has been identified as being at immediate risk of failure due to damage caused by nearby trees.

Soil deposited against the inside face of the wall, which was left following excavations carried out in 1923-25, is also increasing pressure on the wall.

Following advice from Historic England and ecology consultants, the city council will now begin work to remove 17 trees, clear the soil embankment and carry out other essential work to stabilise the wall.

New trees will be planted in the park to replace those lost as part of this essential work.

Leicester Abbey and its grounds are a scheduled monument, a grade I-listed building and form part of the wider Abbey Park, itself a grade II*-registered historic park and garden.

The work is required to comply with the Scheduled Monument and Archaeological Areas Act (1979) and Planning (Listed Buildings and Conservation Areas) Act 1990.

In October 2016, Historic England placed Leicester Abbey, including the precinct wall, on the national Heritage at Risk Register.

City Mayor Peter Soulsby said: “Leicester Abbey is one of the city’s historic treasures and it is vital that we protect and cherish it.

“Alongside this essential repair work, we will be developing a long term plan for the future development of Abbey Park, which will include the restoration, maintenance and management of this scheduled monument as one of the city's many heritage assets and attractions.”

Tree removal will be carried out and scaffolding installed to help brace the wall. There will be some temporary footpath closures required around the wall during the works.

The ground will then be left to settle for around two years, before permanent repair work, including pinning the wall using engineering earth ties and repointing its entire 150metre length, is carried out.

Leicester Abbey, including the precinct wall, has been on Historic England's national Heritage at Risk Register since October 2016.