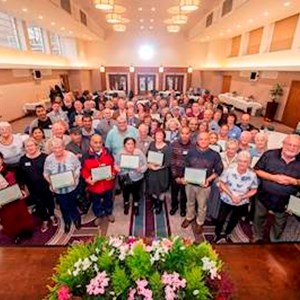 HORTICULTURAL volunteers who have helped their neighbourhoods to blossom have won range of awards for their efforts.

Dozens of independent groups from across Leicester turned out for the Leicester Volunteer Awards 2017, at City Hall, on Tuesday, October 31, for the results of the annual Royal Horticultural Society’s 'It's Your Neighbourhood' and ‘Bloom’ schemes.

The awards cover a range of local projects encouraging people to get involved in gardening schemes to improve their areas.

Forty independent horticultural projects across the city were represented, including community allotments, hanging baskets and planters, and improvements to community gardens. Edible crops grown as part of the schemes are shared among the group and the local community.

A further three groups were recognised with Level One - 'Establishing' awards.

In addition, the ‘Evington in Bloom’ scheme won a Silver Gilt Award in the regional East Midlands in Bloom Urban Community category.

As part of the same submission, The Dove pub in Evington took a Bronze Award for the Best Hotel/Pub Garden display, Mayflower Primary school won a Judges Award for its polite and enthusiastic pupils, while Evington couple Pat and John Pickering won the Silver Frank Constable Award for the Best Residential Garden at their home in Thurnview Road.

The Parks and Open Spaces special trophy was awarded to Geoff Forse for his dedication to ensuring Woodgate remains a beautiful, blooming gateway to the city. He received the Outstanding Contribution Award.

The Volunteer Project Award went to the Thurnby Lodge Community Association for its Level Five award, floral displays at the Thurnby Community Centre and the edible produce grown which supports the regular luncheon clubs in the centre and the wider community.

Evington in Bloom also took the top prize in the Urban Community Category.

He said: “It is always encouraging to see so many people getting involved in their communities, either by making them look their best or by growing crops which can be used to help people locally.

“The wide range of projects recognised by the awards this year show a really diverse range of talents.

“In addition, dedicated Leicester Environmental Volunteers work all year round to help improve the city’s parks and waterways. The combined work of all these community volunteers really do make a big difference across the city.”