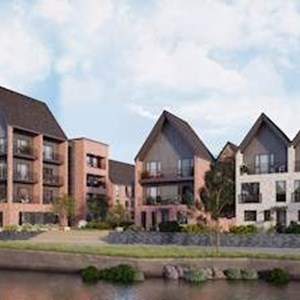 A compulsory purchase order (CPO) granted by Secretary of State has given Leicester City Council the go-ahead to acquire all remaining land and property in the 7.3 hectare site earmarked for the first phase of the Waterside redevelopment.

The city council has been actively negotiating with land owners in the area over the last three years and now owns around 90 per cent of the site. The CPO means the city council can now legally acquire the remaining land it needs to begin the ambitious redevelopment scheme.

A stopping up order, which will enable all the associated roads and highways work to go-ahead, has also been confirmed.

City Mayor Peter Soulsby said: “This is a strong endorsement of our vision to transform the Waterside area into a thriving new neighbourhood.

“The project team has worked hard to obtain the vast majority of the land required by agreement, but unfortunately that hasn’t been possible in all cases.

“Compulsory purchase orders are very much a last resort, but they are also a vital tool in bringing forward major regeneration schemes.

“The regeneration of the Waterside area represents a tremendous opportunity for the city’s growth and future prosperity. It will revitalise this long-neglected part of the city with great new places to live, space for business to flourish and much better access to our beautiful riverside.”

Outline planning permission was granted for the first phase of the Waterside regeneration project in December 2015.

Last year, Keepmoat Homes was named as the council’s development partner for the first phase of the Waterside redevelopment. Keepmoat’s proposed scheme will deliver over 350 new homes and 5,500sqm of new office space, along with new parks and green spaces. The scheme will represent around £45milllion of private investment into the area.

Keepmoat is due to reveal final details of its proposed scheme in the coming weeks, as part of its application for approval of reserved matters. If given the go-ahead, Keepmoat will begin work on site clearance early in 2018.

Andrew Mason, regional managing director for Keepmoat, said: “The confirmation of the CPO is a major milestone in the delivery of the Waterside development. The decision is the result of months of hard work by city council officers and allows Keepmoat Homes to continue to progress our scheme with confidence.

“We will be in a position to share our exciting proposals with the local community soon and we look forward to delivering a vital piece of regeneration in Leicester.”

Work on a new Waterside primary school, located off Fosse Road North, is also due to get underway early next year. The multi-million project will be funded with cash provided by the Department for Education to help ensure that every child in the city has access to a school place. The new school will provide capacity for up to 900 primary-aged pupils, creating an additional 400 pupil places on top of those currently offered at nearby Slater and Fosse primary schools.

The granting of the CPO does not mean the land now automatically belongs to Leicester City Council. A general vesting declaration must first be made. This will begin the process of transferring legal ownership of the remaining properties to the city council which could take around three to four months.

The council will follow government guidelines to ensure that any eligible parties affected by the CPO are compensated for the value of their property or other losses incurred.

Leicester City Council has earmarked £15 million of capital funding for the Waterside scheme. The Leicester and Leicestershire Enterprise Partnership (LLEP) also successfully bid for up to £20milllion from the Government’s Local Growth Fund to help kick start the major regeneration project.

Local authorities can apply to make a compulsory purchase order under Section 226(1)(a) of the Town and Country Planning Act 1990  for the purpose of acquiring land needed to bring forward development, redevelopment or other improvements that will help promote the economic, social or environmental wellbeing of an area.