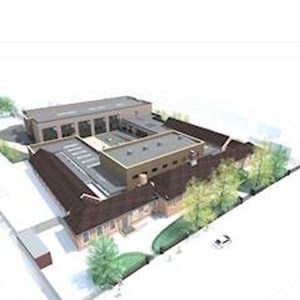 DESIGNS have been unveiled for a major expansion to a city secondary school.

It’s part of Leicester City Council’s ambitious plans to invest up to £90million in a major programme of school expansion, including building a new primary school in the Waterside area of the city, as well as extending a number of other city secondary schools.

The former Ellesmere College site is very close to Fullhurst’s current campus, and would become a base for years 7-8. This would mean the school could extend its capacity, from 900 in 2016/17 to 1,500 pupils by 2019/20. The expansion plans will provide permanent accommodation for this increase of 600 pupils.

The new facility, designed by local architects Maber, would cover 5,000 square metres, and would include refurbishment and extension of the current building as well as the construction of a new teaching block.

The state of the art teaching accommodation would be constructed by Willmott Dixon and would include 21 new classrooms, three science labs, a music room, food technology facilities and a drama studio.

There will also be external landscaping, with car parking and play areas, plus a courtyard with al fresco dining facilities.

The project is set to cost around £14million, some of which will be funded by the council’s Basic Need allocation from the Department for Education.

Deputy city mayor with responsibility for education, Cllr Sarah Russell, said: “This is a really exciting opportunity for Fullhurst and a great chance to provide extra places at a popular and successful school. It also gives a new lease of life to a building that was standing empty.

“Overall, across our expansion programme, we will provide an additional 600 year 7 school places by 2019/20, and more than 3,000 new pupil places overall, across all secondary year groups.”

Steve Piggot, principal of Fullhurst Community College, said: “We’re very proud of our growth over the past few years, with Fullhurst now being rated in the top 200 schools nationally.

“The learning environment is vitally important for both students and staff. Getting these state of the art new facilities will not only allow us to welcome more new students to our school, it will also help us to continue to raise standards.”

The planning application for the site will be considered at the council’s planning committee meeting on 13 December.

Should it be approved, work to clear the site would begin before the end of the year, to allow construction work to start in January 2018.

It is anticipated the first pupils could be on site by the autumn term 2018.