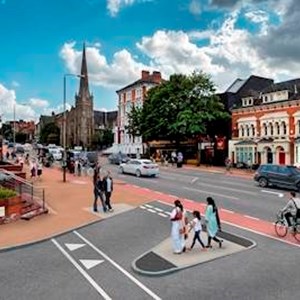 PLANS have been revealed for a major transformation of a stretch of Leicester’s busy London Road.

Leicester City Council is inviting comments on a proposed £2.9milllion scheme to revamp the busy route between Granby Street and the Mayfield Road roundabout and create a safer and more appealing route for pedestrians and cyclists.

New off-road cycle lanes will be created – one inbound and one outbound – on either side of the road between Granby Street and Victoria Park.

The outbound bus lane will be removed to provide space for the new cycle lanes and retain the already generous width of the pavements, which will be reconstructed with bonded gravel. Two lanes for traffic will be retained in both directions.

The improved pavements and new cycle lanes will continue in front of the railway station, where options for a bus-only lane or a drop-off point for motorists are still being considered. The central reservation here will be completely remodelled to provide a safer crossing for pedestrians and cyclists.

Improved crossings will also be introduced at other key points along the road.

The ‘Dutch-style’ design of the new cycle lanes will see riders channelled behind bus stops along the route, helping to improve safety for all road users.

Side roads off London Road will be raised to pavement level at their junctions to help give priority to pedestrians and cyclists, and signal schemes at major junctions will be redesigned to give cyclists a head-start and avoid any conflict with traffic turning left.

Sections of off-peak pay-and-display parking will be kept along both sides of the road, which will also be resurfaced as part of the scheme.

A new two-way cycle track is also proposed alongside Victoria Park to provide a continuous link to existing cycle lanes from Mayfield Road Roundabout. This could require the removal of up to 18 trees on the very edge of the park, but the council would plant new trees nearby to compensate for any lost as part of the scheme.

The major scheme is part of the wider Connecting Leicester project, which is improving routes through the city centre for pedestrians and cyclists, while making it more attractive to investors and developers.

“It’s an ambitious scheme but there really is no easy solution here. London Road is a busy route and the area in front of the railway station is an important public transport interchange.

“This presents some real challenges, and opportunities to do things a bit differently. We will be very interested to hear people’s thoughts on options to introduce a bus only lane, or use this space as drop-off point for car passengers.”

Cllr Adam Clarke, deputy city mayor and executive lead on health and environment, said: “It has taken a long time, a lot of hard work and some invaluable feedback to develop this plan and we are looking forward to hearing the public’s views on the potential transformation of London Road.

“Following the tragic accident last year, it is entirely understandable that this has heightened people’s safety concerns and this has been at the forefront of our minds.

“By reallocating a relatively small amount of road space, we can introduce wider pavements, improved crossings, better bus stops and new dedicated off-road cycle lanes. This will create a much safer and more appealing route for cyclists and pedestrians and help make London Road a more attractive environment for everyone.”

The scheme has been developed with input from local bus companies and user groups, city cycling groups and the family of cyclist Sam Boulton, who was killed in an accident outside the railway station.

His assessment of the proposed London Road scheme – based on its ability to encourage people to walk, cycle and use public transport – was that it represented a huge improvement on the current situation. A small number of outstanding issues were highlighted as part of this assessment, which have been addressed in the design now being put out for public comment.

People can find out more about the proposed London Road improvement scheme when the plans go on display from next week. Members of the project team will be available to answer any questions at the following events:

The plans will also be available to view on the council’s website at www.leicester.gov.uk/connectingleicester

People can email their comments on the proposals to transport-strategyenquiries@leicester.gov.uk

If given the go-ahead, work on the London Road scheme could begin by summer 2018 and is expected to take around a year to complete.