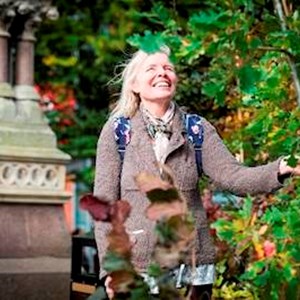 A MINI woodland, complete with trees, shrubs and bird song, popped up at Leicester’s Clock Tower today (Monday, 2 October) as part of a national campaign to tackle the problem of discarded chewing gum.

Leicester City Council teamed up with the government-backed Chewing Gum Action Group (CGAG) to create the pop-up forest, after research suggested that the more natural a space looks, the less likely people are to drop their chewing gum in the area.

The city council is one of more than 40 local authorities across the UK to be involved in this year’s campaign, with each authority receiving paid-for advertising and support from the CGAG to help reduce chewing gum litter in their local environments.

Leicester-based Coles Nurseries supported the local event by providing 140 trees and shrubs that helped transform the Clock Tower area into a mini woodland for the day.

Assistant city mayor for the environment Cllr Adam Clarke said: “The city council has spent millions of pounds upgrading and repaving city centre streets, yet it needs to spend tens of thousands of pounds each year trying to rid those same streets of discarded chewing gum.

“Our challenge is to find a way to make people think before they dispose of their gum.

“This pop-up ‘gum forest’ aims to get people thinking about why they would drop gum in the city centre but would be less likely to do so in a woodland area.

“It’s clearly designed to get people’s attention, and it’s a fun way to raise awareness of the problem, but there is also a serious message here.

“We want to remind people that they face a fine of £80, if they choose to spit or drop their gum on the street.”

The pop-up forest marks the start of a month-long campaign in Leicester, funded by the CGAG.

From today (2 October), posters, banners and beer mats – bearing the slogan ‘Bin it your way’ – will start appearing across the city.

In a bid to appeal to the target audience of 18-34 year-olds, the CGAG’s campaign features images of people doing dance moves as they bin their gum.

Allison Ogden-Newton, chief executive of Keep Britain Tidy – a member of the CGAG – said: “From our experience, we know these campaigns work and really resonate with people.

“The group’s 2016 campaign, for example, saw chewing gum litter reduce by an average of 36% in participating areas, demonstrating the impact the Chewing Gum Action Group’s campaign work can have on the UK’s littering behaviour.”

Any reduction in gum littering in Leicester would be welcomed by the city council, which spent £40,000 cleaning gum off the streets last year. The council has also invested £3,000 in a new hand-held ‘Ecogum’ unit that street cleaners will be able to use to clean up gum from small areas.

Cllr Clarke said: “This new bit of kit will allow our cleansing team to respond to complaints about gum littering more easily, but it’s clearly not the solution to the problem.

“What we need is for people to think about their actions and change the way they behave – and I hope that this campaign will help start that process.”

The CGAG is chaired by the Department for Environment, Food and Rural Affairs and includes representatives of the Chartered Institution of Wastes Management, Perfetti Van Melle, Wrigley Company and Keep Britain Tidy.

More information about the CGAG campaign is available at www.chewinggumactiongroup.org.uk