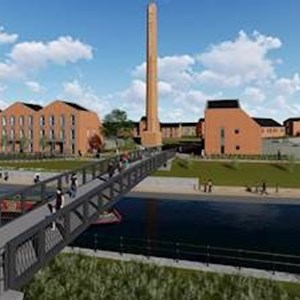 PLANS for a new footbridge connecting Leicester’s Sock Island to Belgrave have been submitted.

The proposed bridge will link new housing developments at the former Wolsey Factory site on Sock Island and the British United Shoe Machinery (BUSM) site on the opposite bank of the Grand Union Canal.

It will provide a direct and attractive route for pedestrians and cyclists between Abbey Meadows and Belgrave, and provide better access to the canal towpath which has recently undergone major improvements as part of a joint project with the Canal and River Trust.

It is estimated that the bridge will cost around £900,000 and will be funded with Section 106 contributions linked to the Westleigh housing development on Sock Island.

The bridge plans also include a new pathway which will lead directly to the distinctive Wolsey chimney, which has been retained as part of the new development.

City Mayor Sir Peter Soulsby said: “Leicester boasts some beautiful riverside settings but, until fairly recently, development in these areas has been slow to come forward.

“With major developers now realising the potential for this area, we can look forward to seeing more of the city’s riverside brought back into use with new places to live and work.

“The proposed footbridge is an important part of this. It will provide an improved link for people who walk or cycle and help encourage more people to explore the city’s beautiful canal towpaths and historic waterways for themselves.”

If the Sock Island bridge plans are given the go-ahead, the bridge should be in place by late 2018.