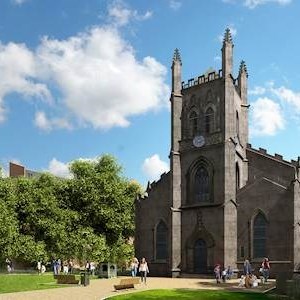 FINAL plans have been revealed for a major revamp of a 19th century churchyard located at the heart of Leicester’s Cultural Quarter.

The city council is proposing to open up and enhance the space around the Grade II*-listed Church of St George to make it a safer and more attractive area, and help open it up onto Orton Square.

St George’s Churchyard is one of the largest areas of green space in the city centre and provides a direct link for people walking between the train station and Cultural Quarter.

As part of the proposed £900,000 revamp, footpaths through the churchyard would be reconstructed in natural stone and resin-bound gravel, with additional lighting columns installed alongside.

About £137,000 of the proposed project funding will come from Section 106 developer contributions, with the rest earmarked from capital set aside for the Leicester Economic Action Plan.

To help protect the church building and create lighter and more welcoming entrances at Orton Square and Colton Square, 21 trees are set to be removed with smaller trees planted around the border of the churchyard.

Lighting will also be installed around the church itself to help make a feature of the building after dark.

The city council has worked with leaders of St George’s Serbian Orthodox Church, which has occupied the building since 1983, to develop the plans. The final scheme has been designed by local landscape architecture and urban design practice Munro+Whitten, which is based at the LCB Depot in the Cultural Quarter.

A detailed public consultation was also carried out in summer 2106, with the majority of respondents supporting the proposed scheme.

However, early proposals to install an outdoor gym and relocated the ceramic mermaid panels from West Bridge into the churchyard were not supported and no longer feature as part of the improvement works.

A planning application for the proposed scheme has now been submitted. If given the go-ahead, work could begin in spring 2018, and is expected to take around six months to complete.

Cllr Sue Waddington, assistant city mayor with responsibility for St George’s Cultural Quarter, said: “St George’s churchyard has the potential to be a really attractive and tranquil area and a very special part of the Cultural Quarter.

“Our consultation showed that local resident and businesses share that view and we are now ready to move the project forward.

“As it stands, the area is rather gloomy and unwelcoming and we know that people don’t necessarily feel safe to use it. The plans we have developed will transform the area into a green oasis, provide a natural and inviting extension to the Cultural Quarter and create a really attractive pedestrian route from the train station.

“It is essential that we continue to invest in the Cultural Quarter to help ensure that this vital part of the city continues to thrive and grow.”

The plan – which has taken around 12 months to develop – sets out an ambitious range of actions to help attract new investment into the Cultural Quarter and strengthen its reputation as a thriving and creative place to live, work and enjoy the arts.

Key aims include the creation of a further 1,850sqm of creative workspace; better signage and improvements to the gateways into the Cultural Quarter; stronger promotion of the area outside of the city; and support to help developers bring forward  schemes for new homes, bars, cafes and restaurants.

The city council has already supported the development of two key buildings which stand on either side of the Orton Square entrance into St George’s Churchyard.

In June 2016, the council provided a £150,000 grant to help kick-start the development of the grade II-listed Queens Building (formerly known as Shahista House). The £3milllion scheme – which is due to finish later this year – will provide 14 new apartments, with restaurant and retail use on the ground floor.

In January this year, the council approved £18,000 of match funding to support the development of the Carron Buildings. The vacant four-storey building will be converted to provide 750sqm of  commercial workspace with a bar or restaurant planned for the ground floor and basement.