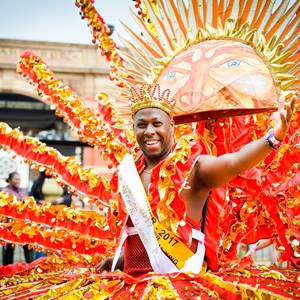 LEICESTER’S streets will come alive with performances by costumed bands from seven UK cities at the 33rd annual Caribbean Carnival on Saturday, August 4.

The festivities are among the city’s biggest and most popular events, with thousands of spectators expected in the city centre to watch the parade and take part in activities at a carnival village in Victoria Park.

“The parade through the city centre is one of the highlights of the calendar, with colourfully-dressed performers, dancers and artists bringing a real party feel to the city centre before festivities get underway on Victoria Park.”

The event will involve a number of road closures and changes to bus stops on the day to allow for the Caribbean Carnival’s colourful procession to take place.

The parade will travel from Victoria Park into the city centre, before returning to Victoria Park for more celebrations including the chance to indulge in Caribbean food, drink and live music.

This year’s carnival theme is “It’s a Latino Fiesta” focusing on the cultural traditions of the Spanish and Portuguese-speaking countries of Central and South America, the Caribbean and Europe.

Buses will not operate along London Road between Victoria Park and the city centre from 12.30pm until late afternoon.

Buses that serve stops in Humberstone Gate East, Haymarket and the southern part of Charles Street will be diverted from around 2pm until the parade has passed through the city centre.

Haymarket Bus station will remain operational throughout the afternoon. Coach and bus services departing from St Margaret’s Bus Station will not be affected.

Park and Ride services will continue to operate but service 303 will not serve Haymarket while the parade is in the centre.

Vehicles will not be able to access Leicester train station during the road closure. Arrangements for Hackney Carriages to and from the station will be via nearby Sparkenhoe Street and Conduit Street.

Details of the event are available online at www.visitleicester.info  For further details of travel options to and from the city visit http://www.choosehowyoumove.co.uk/