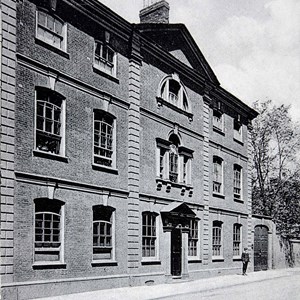 A LEADING international expert on eighteenth-century urban history will give a free public lecture to help launch a new Georgian interest group in the city.

Roey Sweet, professor of urban history at the University of Leicester, will give a talk on the Grand Tour to Italy and how it influenced 18th century travellers during a period on unprecedented urbanisation at home.

The talk will take place on Thursday 6 September from 5.30pm at the Great Meeting House on East Bond Street – a building that dates back to 1708.

Her talk will draw on research for her recently published book ‘Cities and the Grand Tour: The British in Italy 1690-1820’.

The event is free to attend but places must be booked in advance at bit.ly/2L6sgNS

Anyone attending the talk will be invited to join a group focussing on the Georgian era in Leicester.  The group has been set up by Leicester Civic Society, the University of Leicester’s Centre for Urban History and the city council’s conservation team. It aims to complement the work of the Leicester Victorian Society, but with a focus on the 18th rather than 19th century.

Deputy City Mayor and council heritage champion Cllr Adam Clarke said: “Leicester has a rich Georgian history and the city centre in particular has many historical and architectural gems dating back to this period.

A free walking tour of Georgian Leicester – taking in some of the city’s key architectural heritage from the period – will take place on Thursday 13 September from 10.30am. The two-hour expert-led walk will be led by local heritage specialist and author Michael Taylor. It will leave from Leicester Cathedral, taking in significant examples of Leicester’s Georgian architectural heritage in and around the Old Town area, before ending at New Walk, a rare example of a Georgian pedestrian promenade

The tour is also free to attend but places must be booked in advance at the Visit Leicester Centre on Gallowgate Gate, or by calling 0116 299 4444.

For updates on the Leicester Georgian Interest Group visit twitter.com/lgeorgians