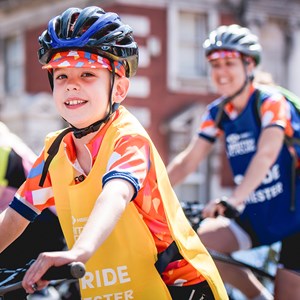 THE ROUTE for Leicester’s annual family-friendly bike ride has been confirmed – and those taking part next Sunday (12 August) will be able to enjoy a traffic-free route past some of Leicester’s most iconic landmarks.

The HSBC UK Let’s Ride Leicester event will start at De Montfort University at 12.30pm, with a 6.5km route that will take riders past the King Power Stadium, Leicester Castle, the Richard III Visitor Centre and the Highcross shopping centre.

Part of the two-week Ride Leicester Festival – which runs from 11-26 August – the free event is designed for people of all ages and abilities.

This year’s event will link up with local attractions, which means that those taking part will be able to ride pitchside at Leicester City FC, meet riders from the Novo Nordisk International team on Cathedral Square, and try rickshaws, punk-art bikes and adapted bikes for all abilities around the route.

Cllr Adam Clarke, deputy city mayor with responsibility for the environment, said: “Once again, we’ll be giving people the chance to enjoy riding past some of Leicester’s most iconic landmarks on traffic-free streets.

“Thanks to our partners at British Cycling, and the support of lots of local businesses and organisations, this year’s event is set to be bigger and better than ever before, and we’re hoping for a bumper turnout from people of all ages and all abilities.

“We’re committed to creating people-friendly streets in Leicester and want as many people as possible to enjoy travelling around the city by bike – not just on Sunday 12 August but every day.”

Julie Harrington, chief executive of British Cycling, said: “Leicester played host to a fantastic event last year, and we’ve worked hard - alongside Leicester City Council and local businesses and attractions - to ensure that HSBC UK Let’s Ride Leicester will again be a truly enjoyable, free and family-friendly day out which showcases the best of the city and the real benefits of cycling.”

Luke Harper, head of HSBC UK’s partnership with British Cycling, added: “Our partnership with British Cycling is about getting more people to experience the joys of cycling, whether they are a new or lapsed cyclist. The HSBC UK Let’s Ride series of events is designed with grassroots cycling in mind, giving people the opportunity of seeing some of our finest cities on a closed road circuit, with additional events for all the family.

“The effect of more people cycling is not to be sniffed at, it will undoubtedly lead to a cleaner, fitter, healthier Britain.”

Full details of the HSBC UK Let’s Ride Leicester event on Sunday 12 August are available at www.letsride.co.uk, where people can also register for the event.

Before the family-friendly event gets under way, spectators will be able to enjoy the thrill of elite bike racing on the cobbles of Leicester’s Old Town. The Leicester Castle Classic – part of the British Cycling Grand Prix Series – starts at 10am on Sunday 12 August.