Foxes fans set to turn the ice blue on Thursday 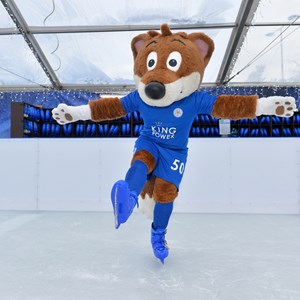 The city council has teamed up with BBC Radio Leicester and Leicester City Football Club to turn the ice blue for the night, with competitions, special guests and some smooth moves on the ice from Filbert Fox.

Joining Ian for the show will be club ambassador Alan ‘Birch’ Birchenall, while City legends Steve Walsh and Gerry Taggart are also expected to pop in to the ice rink for a chat.

At the 7pm and 8pm sessions on Thursday, a special playlist of football anthems will bring the beautiful game to the ice rink, with prizes for the best skaters and for those wearing the best Leicester City-themed outfits.

A pair of size 12 skates is ready for Filbert Fox to pop his paws into, so he can join skaters on the ice and show off the moves he perfected last year.

City council festivals and events manager Maggie Shutt said: “This could be a great night out for the Foxes fan in your life.

“Wear your blue hat, scarf and gloves and show your support for Leicester City, while having lots of fun on the ice.”

Leicester City’s outreach team will bring football fun to Jubilee Square, so fans can have a kickabout before, or after, their session on the ice.

Leicester City ambassador Alan Birchenall said: “We’re all about bringing the LCFC Family together this Christmas so it’s great we’ll have a chance to do that in the heart of the city. It’ll be great to meet some of our fans to wish them a happy Christmas and show once again the fantastic community spirit around our football club.”

The ticket office for the ice rink is conveniently located inside BBC Radio Leicester on Jubilee Square.

Kamlesh Purohit, deputy editor at BBC Radio Leicester, said: “Radio Leicester was proud to have turned the city blue with our #BackingtheBlues campaign during the Foxes’ Premier League title winning season. So ‘turning the ice blue’ on our Boot Room programme alongside the city council and LCFC feels like a wonderful way to celebrate Christmas this year with the people of Leicester.”

Other themed nights are planned for the ice rink, including Christmas Jumper Discos on Friday 21 and Sunday 23 December, and a very special Bollywood night – organised by Radio Leicester – on Thursday 3 January.

Tickets can be bought at www.christmasinleicester.co.uk/buy-tickets/, from the Visit Leicester centre on Gallowtree Gate, or from the Jubilee Square ice rink ticket office at BBC Leicester.

Around 200 tickets are available for each session at the ice rink.

Discounts are available for groups of four or more people, so a family of four can skate for £30 (off-peak) or £34 at peak times.

Sessions start on the hour, with each session giving skaters 45 minutes on the ice.

Skating aids for young children – in the shape of penguins and seals – can be booked in advance online, or hired on the day at the ice rink, subject to availability.

Detail of all events taking place in Leicester this Christmas are available at www.christmasinleicester.co.uk