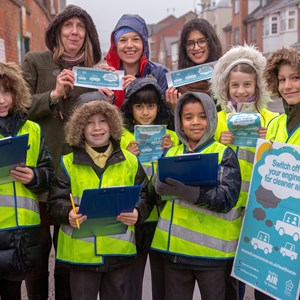 PUPILS at a Leicester primary school are calling on drivers to cut air pollution by turning off their engines while stopping on the school run.

Youngsters at Avenue Primary School in Clarendon Park are running a campaign asking inconsiderate drivers not to leave their cars idling while waiting for any length of time outside the school at the beginning and end of the day.

The campaign is part of wider work by Leicester City Council encouraging schools to become Healthier Air Schools, by working with communities to tackle pollution and improve air quality in the streets around schools.

Leicester deputy city mayor for children and young people’s services, Cllr Sarah Russell, said: “Drivers who sit in with their engines running outside schools are adding to air pollution, and switching off engines when they are not needed is a simple but effective step to cutting emissions and reducing fuel consumption.

“It is encouraging to see pupils getting involved in such an important local issue.

“This campaign is part of wider work being carried out to help get across this message as well as encouraging people to consider more sustainable travel choices such as walking or cycling.”

The city council has appointed an education officer focusing on air quality initiatives, funded until 2020 as part of its Air Quality Action Plan. As part of that work, schools will take part in educational activities emphasising the importance of about air quality, such as experiments into local pollution levels and encouraging parents who have to drive to school to park further away and walk the short distance to the school gates.

An Air Quality Schools Toolkit is being developed for teachers to use by January 2019.

A similar anti-idling campaign took place in April in New Parks, but the increase in people travelling by car following the onset of winter weather and means the message is once again being emphasised.

Year 4 pupil Uthman said: "If we reduce pollution around our school it will be easier for children and wildlife to breath."

Elsa, a Year 5 pupil, added: "We need to reduce the pollution we breathe every day, so we want more parents to park and stride instead of driving up to the school gate."

Switching off a vehicle’s engine when it is stationary for more than one minute reduces the amount of harmful pollutants, such as nitrogen oxides (NOx) and particulate matter (PM10 and PM2.5), emitted.

It can also help reduce fuel consumption. Many newer cars have anti-idling fitted as standard.

“We are a Green Flag Eco School and have been working alongside the city council and the charity Living Streets to promote walking to school and healthy living.

“Many families have taken part in our annual bike and walk to school activity days, which have proved great fun.

“The children on our Eco Committee and in the wider school continue to see this as a very important issue for our future health.

More information about the cleaner air campaign can be found at http://www.choosehowyoumove.co.uk/healthierair/

Details of the Air Quality Education programme for Leicester schools can be found at: https://schools.leicester.gov.uk/services/environment-health-and-well-being/air-quality-education/