Work to begin on next phase on London Road improvement scheme 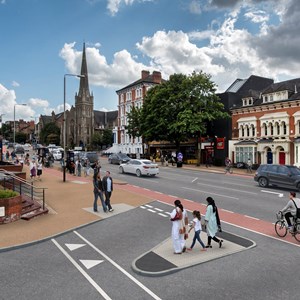 WORK on the major transformation of Leicester’s London Road will move to two busy junctions when roadworks resume early in the new year.

Leicester City Council is set to revamp the route between Granby Street and Mayfield Road roundabout as part of a £3.9million scheme to create a safer and more attractive route for cyclists for pedestrians. The project is backed by £1.2milllion from the European Regional Development Fund.

From Monday 7 January, roadworks will get under way at the junction with Evington Road and Granville Road, and on the large central reservation in front of the railway station.

At Granville Road, work will be carried out to begin construction of the new cycle lane and improve pedestrian crossings at the busy junction.

During the works, there will be no left turn from Granville Road onto London Road. Traffic will instead be diverted via the Mayfield Road roundabout. Some off-peak lane restrictions will also be required. This phase of work is expected to last around four to five weeks.

Pedestrian crossings will be maintained throughout the works.

Work will also begin to construct a new bus-only lane in front of Leicester Railway Station. This will involve remodelling the large central reservation, which will be reduced in size to make space for the new camera-enforced bus lane and protected cycle path which will run directly in front of the station. The existing bus stop and right-hand turn on the central reservation will be permanently removed.

Pedestrian access will be maintained through the works area.

Bus services into the city centre will use the existing bus stop located between Regent Street and Nelson Street, close to The Hind public house.

Work to extend and improve the existing bus stop located close to the junction with Waterloo Way will also be carried out.

Off-peak lane restrictions will be in place during the works, which are expected to last two to three months.

Roadworks were temporarily suspended on London Road due to Christmas. Work moved to creating a new cycle path between the trees along the London Road edge of Victoria Park. This is due to be completed in early-2019.

Future phases of the project will see new cycle lanes created on both sides on London Road. These will feature raised kerbs to offer more protection to cyclists. The road will also feature new ‘Dutch-style’ bus stop bays.  These will channel cyclists behind the shelters, helping to improve safety for all road users.

The major scheme is part of the wider Connecting Leicester Programme, which is improving routes into and through the city centre and helping to make it more attractive to residents, visitors, businesses, investors and developers.

City Mayor Peter Soulsby said: “This important scheme represents a major investment in the London Road area and in our commitment to make Leicester a people-friendly city.

“It will create a much safer and more appealing route for cyclists and pedestrians without compromising this busy route for other road users. It also gives us the opportunity to introduce some ambitious improvements around the major public transport interchange at the railway station.

“Of course, a project of this scale cannot be carried out without some disruption but the project team is working hard to keep this to minimum.”

The work is being carried out on behalf of the city council by Eurovia, one of the world's leading transport infrastructure construction and development companies.