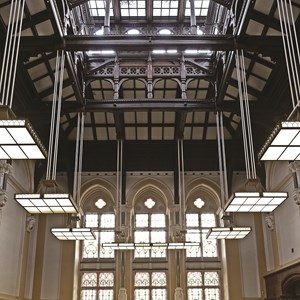 A CAMPAIGN to raise money for essential repairs to a historic Leicester bank building has reached its target thanks to the city council’s crowd fund initiative.

The International Society for Krishna Consciousness (ISKCON) – which owns the grade II-listed former bank building in Granby Street – launched a bid through the CrowdFund Leicester scheme to raise part of the £500,000 needed to repair the structure.

The landmark building dates back to 1874 and was designed by Joseph Goddard, the architect behind Leicester’s Clock Tower, Thomas Cook Building and many others.

The former bank building has been on Historic England’s list of buildings at risk since 2010, but earlier this year the heritage watchdog warned that the building’s roof was at risk of collapse.

Now ISKCON has managed to raise the funds needed after its CrowdFund Leicester campaign reached its target of £112,000.

This means work can begin on restoring the roof and installing new photovoltaic glass to generate clean energy for the building. The building’s community hub, which attracts around 30,000 visitors a year, will also be able to reopen to the public.

Jaap Alberts, grant officer at ISKCON Leicester, said: “This is a major step in the right direction, which is preserving this building and opening it up as a vibrant community hub.

“A big thanks to all that that supported the campaign and especially CrowdFund Leicester and Spacehive.”

The CrowdFund Leicester campaign received 65 pledges of support from members of the public and other funders.

It also received a £10,000 pledge from the City Mayor’s Community Engagement Fund, which was set up to support popular ideas that benefit local communities, help eliminate discrimination, promote equality of opportunity and encourage good relations between communities.

City Mayor Peter Soulsby said: “Quite apart from being an iconic Leicester building and important part of our architectural heritage, ISKCON have worked hard to ensure that the Goddard bank plays an important part of the cultural life of the city.

“The organisation has done a remarkable job of raising the money needed to repair and preserve this landmark building. I am delighted that the CrowdFund campaign was so generously backed, and also pleased that we were able to support this important appeal through the community engagement fund.”

CrowdFund Leicester was launched in September 2017 by Leicester City Council, through a company called Spacehive, which runs the supporting website behind the scheme.

The ISKSCON ‘Save Goddard Bank’ campaign is the fourth CrowdFund Leicester appeal to reach its fundraising target.

Others include the Phoenix Access Cinema Appeal, which provides headset to help people with sight and hearing loss enjoy films; The Urban Equestrian appeal to buy a new minibus to transport inner-city children to stables around Leicestershire; and the first phase pf the Little Theatre Centenary Project scheme which will see the 1920s building extended and modernised.

To find out more about CrowdFund Leicester visit www.spacehive.com/movement/crowdfundleicester