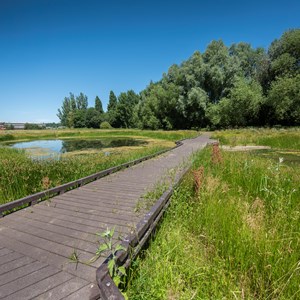 A NATURE park created on the banks of the River Soar has been recognised for its role in nature conservation in a national awards scheme.

Ellis Meadows – close to the national Space Centre in Leicester’s Belgrave area - was highly commended for best practice in large-scale practical nature conservation by the Chartered Institute of Ecology and Environmental Management (CIEEM) at its annual awards.

Completed in late 2016, the new 20-acre park and nature area is the result of work by the Environment Agency and Leicester City Council to reduce flood risk to over 2,000 local homes and businesses.

It features a lake and wetland areas linked by a boardwalk and framed by an attractive wildflower meadow. A woodland boundary was created by planting 600 new trees, including hawthorn, hazel, elder, field maple and guelder rose.

These provide important mix of natural habitats and the area is now flourishing as a home for wildlife.

Among the new inhabitants are a variety of species of dragonfly, bumblebee, butterfly and beetle along with birdlife including grey heron, little egret, pied wagtail, moorhen, mallard, mute swan, swifts and swallows. The local bat population is also thriving.

Dr Helen O’Brien, senior nature conservation officer at Leicester City Council, said: “It’s been fantastic to see how Ellis Meadows has flourished as a home for wildlife in such a short amount of time.

“We’re already recording a really diverse range of species in and around the ponds and meadows, which means it is already playing a vital role in supporting and enhancing the bio-diversity of the city. To see that recognised at the CIEEM awards was fantastic.”

Deputy City Mayor Cllr Adam Clarke, who leads on environment and public health, said: “Ellis Meadows is just one example of the ambitious citywide programme of flood risk management that we’re working closely with the Environment Agency to deliver.

“It’s a perfect example of how this work is also improving the city’s riverside for people and wildlife.

“Along with helping to prevent flood risk to hundreds of nearby properties, Ellis Meadows is now a thriving home for nature and an important part of our commitment to supporting bio-diversity in the city.”

Paul Lockhart, Area Flood and Coastal Risk Manager at the Environment Agency, said: “The success of the scheme is testament to the close collaborative working between the Council and the Agency and the value that both organisations place on finding multiple benefits from the schemes they deliver.

“Ellis Meadows is a shining example of delivering natural flood risk management in an urban environment and has improved recreational, amenity and aesthetic value in the area for the benefit of the community as well as reducing flood risk to a large number of homes.”

The CIEEM exists to raise the profile of professional ecological and environmental management and promote the highest standards of practice for the benefit of nature and society.

The Ellis Meadows project was supported by £164,000 of Local Growth Fund from the Leicester and Leicestershire Economic Partnership (LLEP).  In total the LLEP has contributed £7.5million of Local Growth Funds to support a series of inter-related projects for the River Soar Strategic Flood Risk Management programme.

Kevin Harris, LLEP Chair said “The LLEP has supported this project as reducing flood risk will provide security for existing dwellings and businesses and enables future development resulting in increased economic activity. I am delighted that the project has been highly commended by CIEEM and become an attractive site for people and wildlife alike.”