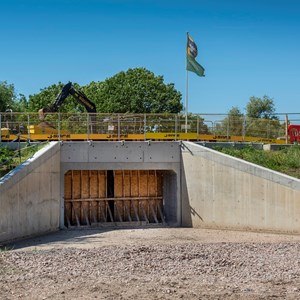 A MAJOR road bridge in Leicester will close to traffic for up to eight weeks this summer as vital flood risk work nears completion.

Loughborough Road Bridge will close to traffic from Sunday 15 July, for up to eight weeks, while a new flood water culvert and subway is installed.

The work is a vital part of a £5million project being managed by the Environment Agency in partnership with Leicester City Council. It will reduce flood risk to over 600 homes and businesses in the nearby Belgrave and Abbey Meadows areas.

The final phase of the project is now set to begin almost two months earlier than originally planned. This will involve the installation of a five metre-wide culvert that will significantly increase the amount of water that can pass under the bridge.

Currently, there a is a risk that the bridge – which spans the River Soar – could act a bit like a dam in the event of a flood, causing water to back up.

The new culvert will act as a bypass for flood water, helping to significantly reduce flood risk to hundreds of nearby properties. It will also act as a subway on a new riverside cycleway that is being created as part of the project.

Other improvements include upgrades to existing footpaths and new wildlife habitats. Land on both sides of the bridge has been lowered and new drainage ponds have been created to provide a larger and more efficient natural floodplain.

An inbound lane closure has been in place at the bridge since January 2018, while essential preparatory work was carried out. This included work to divert service cables and pipes that was carried out by five different utility companies.

During the full road closure at the bridge, clearly signed diversions will be in place along Abbey Lane and Abbey Park Road, and outbound along Melton Road and Watermead Way.

Work will now be carried out during the schools’ summer holiday when there is usually 10-15 percent less traffic on the roads, but delays are still are expected and drivers are advised to allow extra journey time.

The footpath beneath Loughborough Road Bridge will also be closed during the works. An alternative pedestrian route – via Thurcaston Road Bridge and Abbey Lane – will be well-signed on site.

Paul Lockhart, area flood risk manager at the Environment Agency, said: “This major work at Loughborough Road Bridge is an important part of our ambitious programme of reducing flood risk in Leicester.

“The road closure will allow for the installation of the culvert over the summer. Once complete, this important project will help reduce the risk of flooding to hundreds more homes and businesses as well as improving this attractive part of the riverside for people to use and enjoy.”

City Mayor Peter Soulsby said: “It’s great to see that work is progressing well on this major project, which represents another step in improving the city’s resilience to flooding

“We appreciate that closing a bridge on a busy road will cause disruption for people who live nearby and motorists who rely on these routes, but this is vital work that will protect hundreds of nearby properties from the risk of flooding.

“Our partnership with the Environment Agency means that we are continuing to combine our determination to tackle flood risk with innovative projects to improve our riverside and make the most of this natural asset. The work at Loughborough Road Bridge is another good example of how this benefits the city.”

The joint approach by the Environment Agency and Leicester City Council has been recognised by the Government as an example of best practice in natural flood defences.

A number of flood management projects have already been completed under the partnership programme of works.

These include the creation of Ellis Meadows – an award-winning 20-acre park and nature reserve – and improvements to the Co-op sports pitches on land close to Watermead Way. Both areas now act as natural flood defences offering increased protection to about 1,500 nearby properties.

Environmental surveys will be carried out over the summer as part of the development of a new phase of flood relief work in the city. Along with further work to the River Soar, this will focus on developing proposals for flood relief schemes along the Willow Brook and Braunstone Brook. The proposed schemes could potentially help reduce flood risk to a further 2,900 properties.

The Loughborough Road Bridge flood relief scheme is being delivered on behalf of the Environment Agency. It has been designed by global engineering experts AECOM and is being carried out by Jacksons, one of the largest civil contractors in the UK.

The project is just one part of £2.6 billion the Environment Agency is investing in flood and coastal management schemes to reduce flood risk to over 300,000 homes in England by 2021.