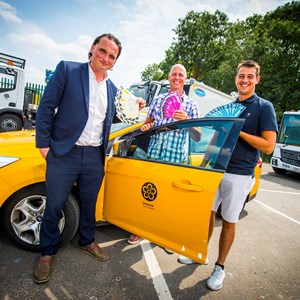 LEICESTER City Council is giving its backing to a road safety campaign launched by the family of a cyclist killed outside Leicester railway station.

The Sam Says campaign was launched in memory of Sam Boulton, a 26-year-old teacher who died after a taxi passenger opened her door knocking him into the path of a van on London Road. It aims to educate drivers about the dangers of ‘car-dooring’.

As part of the campaign, safety stickers have been produced with Sam’s image and the message ‘Stop! Before you open the car door, check for cyclists.’

Sam’s dad Jeff and his brother Joe are hoping to get the stickers in as many taxis, fleet vehicles and family cars as possible across the city and county.

Leicester City Council is the latest organisation to support the campaign by pledging to introduce the stickers across its fleet of over 720 vehicles.

Dad Jeff Boulton said: “The Sam Says campaign is about reminding people of the dangers and potential human costs of car-dooring and the simple things we can all do help prevent it from happening.

“Sam’s death was heart-breaking for the whole family and we want to mark his memory by helping to make sure it doesn’t happen again.

“The aim is to get the Sam Says stickers into as many vehicles as possible. It’s so important that drivers and passengers remember to take a moment to check for cyclists and take care when opening their doors.

“We’re really grateful to the city council and the taxi firms that are already supporting the campaign for setting such a positive example. We hope other companies will follow their lead.”

The council has hundreds of vehicles and it’s vital that we lead by example in such an important safety campaign. We’re very proud to support Sam Says.”

Design and printing costs for the stickers have also been met by a grant for the city council’s £300 Bike Challenge.

The Sam Says campaign has also received support from national cycling charity Cycling UK. It believes that the offence of ‘car-dooring’ – which currently carries a maximum fine of £1,000 – is trivialised as a minor offence.

The charity is calling on the Government to improve driver education and introduce a new offence of causing or permitting serious injury or death by car-dooring, backed by tougher penalties.

A second Critical Mass ride ‘Ride for Sam’ celebrating Sam’s life is set to take place on Friday 27 July, two years to the day since his death.

People can follow the Sam Says campaign at www.facebook.com/SamBsays