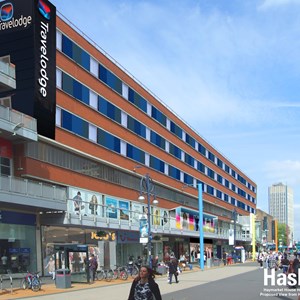 A MULTI–MILLION pound package of improvements is being proposed that would give a massive boost to the regeneration of the Belgrave Gate area while bringing in significant annual income for Leicester City Council.

The city council wants to invest £10million in a scheme that would allow it to secure a 125-year lease on Haymarket House – the vacant building above the Haymarket Shopping Centre – so that it can be redeveloped as a 67-bed Travelodge hotel.

The scheme would also fund improvements to the under-used Haymarket car park and pay for two new lifts that would serve the new hotel, the car park and the recently-refurbished Haymarket Theatre.

Increased revenue from the revamped car park, combined with rent payments for the hotel from Travelodge, would help boost the council’s revenue budget by more than £200,000 a year – rising to an estimated £280,000 after 10 years.

City Mayor Peter Soulsby said: “This is a high profile part of our city centre and it is vital that we continue to invest in it.

“As government cuts continue to reduce our annual income, we have to find new ways of bringing in the money we need to run vital services.

“Investing in the hotel building and improving our car park will bring us a better return on our money than could be obtained from the banks – and it will also help boost Leicester’s economy by attracting more visitors and encouraging further investment in the city centre.”

Works to refurbish Haymarket House would be carried out by the building’s owners, before the council would buy the lease and let the building to Travelodge.

The hotel proposal would be made viable by the council carrying out major works to completely refurbish the Haymarket car park. The 485-space car park would benefit from new surfacing, better lighting, number plate recognition ticketing and CCTV to bring it in line with other high-quality car parks in the city.

The package would also see the council extending its current lease on the Haymarket car park until 2049.

New lifts would be installed as part of the scheme, providing access from Belgrave Gate to the car park, the hotel, and the Haymarket Theatre – and ensuring full access for people with disabilities.

The proposed new investment in Haymarket House – which has been empty for 10 years – would give a further boost to the Belgrave Gate and Church Gate area, which is already set for a major revamp.

Improvements already planned for the area include a new look for Church Gate and Belgrave Gate, which will be repaved using materials similar to those used in nearby Silver Street and Guildhall Lane. Under the council’s proposals, both streets would be pedestrianised, while buses would use a new route linking Belgrave Gate with Mansfield Street.

Funding for the Haymarket House proposals includes investing £8.4million from funds set aside to repay the council’s long-term debt, with existing capital and revenue resources making up the balance of the £10million scheme.

Income from the investment will give the council a better return on its money than it would get from leaving it in low interest bank accounts.

The Haymarket House scheme is subject to an initial 25-year lease to Travelodge.

The City Mayor is due to make a decision on the proposal later this month.