Exhibition aims to collect memories of flooding in Leicester 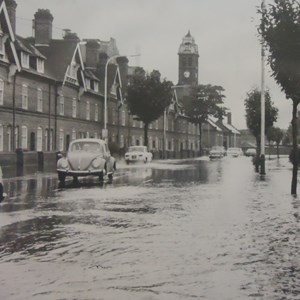 IT has been almost 50 years since Leicester was affected by severe flooding and people are being asked to share their memories for an exhibition.

On 11 July 1968, the Saffron Brook burst its banks following heavy rainfall, causing serious flooding in the Saffron and Aylestone areas of the city.

An exhibition collecting memories and photographs of the 1968 flood is being organised to help raise awareness of what people can do to prepare for flooding.

People can submit their own photographs, stories and experiences of the 1968 flood, or other flooding in the city, and the best entries will be shown as part the exhibition.

Deputy City Mayor Cllr Adam Clarke, who leads on environment and public health, said: “This 50th anniversary is a good opportunity to remind people that climate change has increased the risk of flooding in cities like Leicester.

“Huge investment was made following the 1968 floods and today investment continues as part of our partnership with the Environment Agency.

“I hope people will share their own memories as part of the exhibition and take the time to consider the steps we need to take now, as a city and as individuals, to ensure that we are as prepared as possible for a major flood event."

The exhibition is due to be held at Newarke Houses Museum on Friday 13 July and Saturday 14 July.

People have until Friday 29 June to submit their memories for consideration at the Leicester Water Community website, which has been set up as part of the EU-funded POWER project.

The POWER project is an EU-funded international scheme to share best practice and advice on global water issues, such as flooding, drought and water conservation.

Leicester is one of the project’s four key demonstration cities, along with Milton Keynes, Jerusalem, and the Spanish city Sabadell.

The local project is led by De Montfort University with support from Leicester City Council.

Leicester City Council is also working closely with the Environment Agency on a multi-million pound programme of flood risk management work across the city. This includes the award-winning Ellis Meadows scheme and ongoing work at Loughborough Road Bridge to install a major flood relief culvert.

The programme of work will help reduce flood risk to thousands of local homes and businesses and has been recognised by the Government as an example of best practice in natural flood defences.