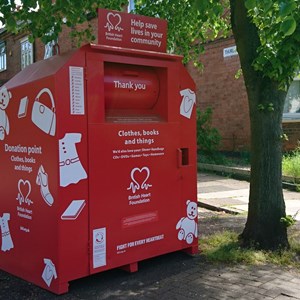 STUDENTS moving out of their term-time homes for the summer are being given a helping hand to dispose of their waste and get rid of unwanted items.

Leicester City Council has teamed up with British Heart Foundation (BHF) to bring the charity’s Pack for Good scheme to some of the city’s most popular student areas. Five temporary drop-off banks have been installed in streets close to the city’s two universities to encourage students to donate any items they no longer want and help the charity generate vital stock.

BHF shops are always in need of clothing, accessories, CDs, DVDs, books, kitchenware and small electricals such as hairdryers and hair-straighteners.

Amanda Purkiss, University Campaign Executive at the BHF, said: “We’re working alongside Leicester City Council to encourage students to donate their unwanted goods to us. This will be a huge help to our shops in Leicester and I’d hope as a many students as possible get involved and support the new scheme.

“Coronary heart disease is the UK’s single biggest killer. Through the Pack for Good scheme, students can support the BHF by using the new facilities to donate unwanted items after they’ve had an end-of-year clear out.”

Over £2500 worth of donations were collected in the first two weeks of the bins being placed.

Deputy City Mayor Cllr Adam Clarke, who leads on environment and public health, said: “As students prepare to move out of their rented accommodation for the summer, they can face a bit of a challenge getting rid of the stuff they don’t want to take with them. The BHF’s Pack for Good scheme gives them the chance to donate any items that could be used again.

“It’s a really good way for students to get rid of their unwanted items responsibly and charitably.

“The council will also be backing this up by promoting the free bulky waste collection that students can use to have any large items and additional bags of waste removed.”

Donation points for the BHF’s Pack for Good scheme will be in place until mid-July, and can be used by local residents as well as students. They are located at Victoria Park, Queens Road and Thurlow Road in Clarendon Park; and at Briton Street and Jarrom Street in Westcotes.

For more information about the donation banks or to book a free bulky waste collection visit www.leicester.gov.uk/studentrecycling