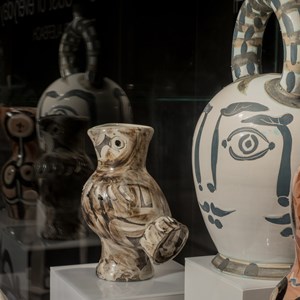 A STUNNING collection of Picasso Ceramics forming part of the personal collection of Lord and Lady Attenborough has been given a permanent home at New Walk Museum and Art Gallery.

The Arts Council has announced that the group of 76 ceramics, which has been on loan at the gallery since 2007, have now been permanently allocated to the museum through the Acceptance in Lieu Scheme.

The collection has been accepted by the Government in lieu of inheritance tax and allocated permanently to New Walk Museum.

The announcement (on Friday, June 22,) comes the same day as the official launch of a new Picasso Ceramics gallery at New Walk Museum, that will house the collection which has been on display upstairs at the museum since 2011.

The gallery opens to the public from Saturday, June 23.

Lord Richard and Lady Sheila Attenborough amassed the collection over numerous visits to Picasso’s workshop in Vallauris in France during their summer holidays in the 1950s and 1960s. Many pieces were bought directly from Picasso himself.

The Attenborough Collection was first exhibited at New Walk Museum back in 2007, in memory of the Attenboroughs’ daughter and granddaughter who tragically died in the Asian tsunami of 2004.

Around 40 of the 76 items from the current collection have been on display since 2011.

Following the deaths of Lord and Lady Attenborough, the Attenborough Estate offered the 76 ceramics on loan to New Walk Museum to the nation, in a process overseen by the Arts Council.

Leicester City Mayor Peter Soulsby said: “The Attenborough family has a long association with the city, and Lord Attenborough was a keen patron of the arts here for many years.

“Lord Attenborough’s original loan to the city resulted from his time as Patron of the Leicester City Challenge programme.

“He became very involved with the project which brought more than £400m of jobs and regeneration to the Bede Island area of Leicester. The wonderful Attenborough Centre for the Arts also resulted from this.

“The Picasso Ceramics collection gives a unique insight both into Picasso as the artist, and Lord and Lady Attenborough as keen art collectors, and I am deeply grateful to the family for bequeathing this unique personal collection to the city for future generations to enjoy.”

The new dedicated Picasso Gallery at New Walk Museum has been designed to make it more accessible and engaging for visitors.

Its downstairs location, within the area of the museum used for fine arts and Arts and Crafts, will feature a film of Picasso at work in his studio in Madoura, Spain, along with a large photograph of the artist himself.

It is also likely to be used for more child-friendly events linked to the exhibition, including workshops using clay, paints and worksheets suitable for young visitors.

The move will also make way for the museum’s popular Egyptian Gallery to relocate upstairs.

Michael Attenborough, Lord and Lady Attenborough’s son, added: “It was always my mum and dad’s wish that a part of their treasured collection of Picasso ceramics should be donated to the nation in memory of my beloved sister Jane and my beautiful niece Lucy, who died in 2004 in the Indian Ocean tsunami.

“More particularly, that they be exhibited in Leicester.

“My father grew up in Leicester, it was his home town, and he believed passionately that the arts should be available to everyone.

“So where better to found, almost 20 years ago, the fully accessible Attenborough Arts Centre and now, in the handsome New Walk Museum, to share these magnificent testaments to Picasso’s genius.”

“The allocation is particularly appropriate due to the Attenborough family’s strong association with the museum and the city of Leicester.”

Auctioneers Sotheby’s worked with New Walk Museum on researching and valuing the collection, and the Attenborough Estate’s application to the Arts Council for the collection to remain in Leicester’s flagship museum.

Wendy Philips, head of Sotheby’s Tax and Heritage, and Deputy Chairman of Sotheby’s UK, added: “We’re delighted to have played a part in negotiating the placement of this magnificent collection of Picasso ceramics with the New Walk Museum and Art Gallery, and securing a permanent home for them in Leicester, a city that was so close to the hearts of Lord and Lady Attenborough during their lifetime."