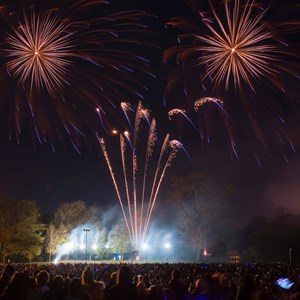 PREPARATIONS are well underway for Leicester’s biggest and best bonfire and firework display this weekend.

The historic setting of Abbey Park will once again stage the huge event on Saturday, November 3, with a programme of live entertainment, firework displays and a dramatic bonfire.

Organisers are calling on people to bring any unwanted wooden pallets to the park to be used to build the huge bonfire.

Pallets, which need to be clean and dry, can be delivered to Abbey Park on Friday, November 2, between 7.30am and 1.30pm.

This year’s display is themed around 1970s disco, with glittering disco balls, funky flares and dodgy dance moves will all featuring as part of the fun.

The stage programme will include a dazzling performance by Leicester motown and soul band Johnny and the Goodtime Boys, as well as a stage-led choreographed audience dance routine by Guru Dudu.

Five large suspended glitter balls will add a sparkling dimension of disco lighting amid the celebrations, which will culminate in the huge bonfire being lit at 6.55pm to the sounds of The Trammps disco classic ‘Disco Inferno’.

Visitors are even being encouraged to dress up in their best 1970s club gear to join in the festivities.

The programme of events runs from 5pm to 9pm, with attractions guaranteed to appeal to all ages.

Gates open at 5pm, with the onstage show beginning at 6pm. A quieter children’s firework display will take place at 6.45pm, with the bonfire lit at 6.55pm.

The fun steps up a gear from 7pm in a programme of main stage entertainment with GEM Radio, including sounds of the 60s and 70s with Johnny and the Goodtime Boys, plus Guru Dudu’s unique interactive dance routine.

The fireworks finale sparks up at 8pm illuminating the sky above Abbey Park with a spectacular light show.

“As in previous years, we are always grateful for unwanted wooden pallets which we can use as part of the bonfire. People need to bring them to Abbey Park on Friday, between 7.30am and 1.30pm, and we will gladly take them and use them.

“Once again, I’d also urge people to get their tickets in advance, both to make the most of the discounted price and to save them from having to queue at the gate on the night.”

People can buy advance tickets, offering up to 40 percent off the full gate price - from Visit Leicester or the box office at De Montfort Hall up until 4.30pm on Saturday, November 3.

Adult tickets bought in advance cost £6, with concessions and under 16s costing £4, or £16 for a family ticket admitting two adults and two children. Under fours go free but will be issued with a wristband.

From 5pm, people can buy full price tickets on the gate, costing £8 for adults, and £5.50 for concessions and under 16s. No family tickets are available on the gate.

Tickets are available from Visit Leicester in Gallowtree Gate, or the De Montfort Hall box office on 0116 233 3111. Tickets can also be bought online at www.demontforthall.co.uk

Free bike parking is available on site at Abbey Park.

More details of the event are available at www.visitleicester.info