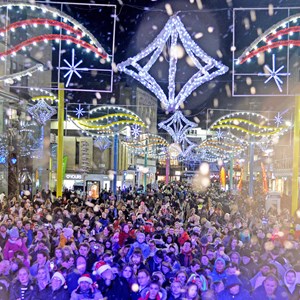 THE COUNTDOWN to Christmas begins this week with the switch-on of Leicester’s glittering Christmas lights.

From 5pm on Thursday (22 November), a packed programme of live entertainment on the Humberstone Gate stage will get everyone feeling festive – with sing-along songs, foot-tapping tunes and a special visit from Santa.

There’ll be a performance by local dance group Studio 79, music from the Simpletones, and a classic Christmas song from Peter Pan star Sam Bailey, before ITV News Central presenter Matt Teale starts the build-up to the big countdown.

Lord Mayor of Leicester Cllr Ross Grant will join Matt on stage for the big switch-on, which this year will be broadcast live on ITV News Central so thousands of people across the region can share in the fun.

Weather presenter Des Coleman – who was due to host the event – is unfortunately unwell and unable to attend, but his ITV News Central colleague Matt is delighted to step in and get Christmas started in Leicester.

Matt Teale said: "I love Christmas, it's a wonderful family time. I'm so excited to be at Leicester's Christmas Lights Switch-On. Not only will I be in charge of that all-important countdown, but the festivities will also be broadcast live on ITV News Central. I can't wait to get Christmas officially started in Leicester."

As the Lord Mayor flicks the switch at 6.20pm and the city lights up, a flurry of snow will gently fall over the crowds on Humberstone Gate.

Leicester’s Clock Tower Christmas tree – freshly dusted with snow that morning – will be lit up with thousands of white pea lights, while the city’s shopping streets will be bathed in the glow of 16,000 festive lamps.

The city’s 14m tree has this year been sponsored by PPL PRS, while the Christmas lights switch-on event is sponsored by Octopus Energy.

Zoisa Walton, director, Octopus Energy Business Solutions, said: "After an exciting year of growth in Leicester, we are delighted to be the sponsor of the city’s Christmas lights switch-on; cementing our business firmly in the heart of the city and sharing the Octopus mission of speeding the transition to a clean energy future for local businesses and domestic customers.”

City Mayor Peter Soulsby said: “The Christmas lights switch-on is a huge event in Leicester’s calendar and attracts thousands of people to the city every year.

"This year, for the first time, we’ve received generous sponsorship from the private sector to support our switch-on event and Christmas tree.

“I would like to thank Octopus Energy and PPL PRS – two businesses that have only recently made Leicester their home, but are already making a huge contribution to their adopted city. Their generosity will help ensure that Leicester’s Christmas programme has something for everyone this year.”

The Humberstone Gate stage progamme will continue after the big switch-on, with live music from the Platforms and Nikki Pope bringing the show to an end at 8pm.

Over in Town Hall Square, visitors will be able to see a tableau scene featuring Alice in Wonderland and listen to music from the Wigston Enterprise Band and the Oh Happy Days children’s choir. Leicester’s traditional nativity scene can also be found in Town Hall Square.

Anyone feeling peckish should head for new Market Square, where they’ll find award-winning street food and live entertainment from 12 noon until 10.30pm.

Highcross will have lots of festive entertainment from 5pm until 9pm – while Leicester’s Wheel of Light in Jubilee Square will be giving visitors a bird’s eye view of the city’s glittering Christmas lights until 10pm.

Full details of Leicester’s Christmas events and attractions are available at christmasinleicester.co.uk

There is also a free Christmas in Leicester guide, available from the Visit Leicester information centre on Gallowtree Gate.

Award-winning street food with a festive flavour – and live entertainment!

Look out for the Winter Fairy, some crazy Winter Wonderland Birds and the colourful Light Belles

See the story of Christmas and an animated tableau scene under the festive lights in Leicester’s historic Town Hall Square, with carols and a brass band on switch-on night.

Look out for dancing snowflakes, Russian princesses, giant swans, a winter dragon and an animatronic reindeer in St Peter's Square and inside Highcross from 5pm-9pm

Open until 8pm on Thursday 22 November.

OTHER CHRISTMAS EVENTS IN LEICESTER

Visit Santa in his snow-covered grotto, every day until 23 December. Free admission – and free small gift for every child.

Add your own face to LightWeight – a unique interactive illuminated sphere – or just soak up the festive atmosphere in the beautifully lit gardens. Brought to you by BID Leicester and St Martins House every day until 22 December.

Enjoy the finest festive food and drink at Leicester’s German-themed outside bar.

Open daily from 10am-9pm until 24 December