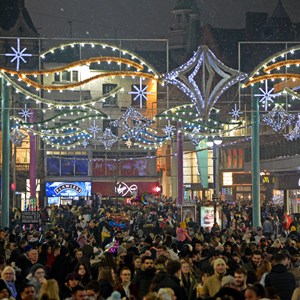 About 22,000 people packed into Humberstone Gate and the area round the Clock Tower for the spectacular event, which featured a programme of entertainment and guest appearances, all compered by ITV Central News presenter Matt Teale.

Leicester City Council has invested in more than 16,000 sparkling lights across the city centre, including for the first time in the streets around St Martins.

A 14-metre Christmas Tree has taken pride of place near the Clock Tower, while Town Hall Square features the traditional festive tableau and nativity scene.

Visitors were treated to live music on the main stage by the Simpletones and glam-rock tribute band The Platforms, and were entertained by the stars of De Montfort Hall’s winter pantomime Peter Pan, including former X Factor winner Sam Bailey and BBC Radio Leicester’s Martin Ballard.

The switch on itself - by Leicester Lord Mayor Cllr Ross Grant and Santa Claus - was followed by a performance of the Bing Crosby classic ‘White Christmas’ by Sam Bailey, who won X Factor in 2013.

Leicester deputy city mayor Cllr Piara Singh Clair said: “It was fantastic to see so many people coming to share in the Christmas spirit and kick start the festive season in the city.

“The event had a really fun, friendly atmosphere, and brought out the best in what the city centre has to offer.”

Other attractions on the night included a display of electric vehicles by Octopus Energy outside Visit Leicester in Gallowtree Gate, and a family zone in Town Hall Square showcasing the latest electric vehicles available.

City Mayor Peter Soulsby added: “I am very pleased to see the city looking its best as we head towards Christmas. We’ve invested an additional £50,000 this year on our lights and decorations covering more of the city centre than ever before.

“The lights and the tree look fantastic, and create a wonderful festive atmosphere for shoppers to come into the city to make the most of our late-night shopping, dining and entertainment.”

Zoisa Walton, Director of Octopus Energy Business Solutions, added: "Octopus Energy is delighted to have been the sponsor of the successful Leicester City Christmas Lights Switch On.

“We feel very much part of the local community and are excited to be operating in the heart of a city that shares the Octopus mission of speeding the transition to a clean energy future.

“With such a fantastic year of growth in Leicester, and a sparkling event last night, we'd like to take this opportunity to wish all in Leicester - a very Merry Christmas!"

Full details of Christmas in Leicester are available at www.visitleicester.info