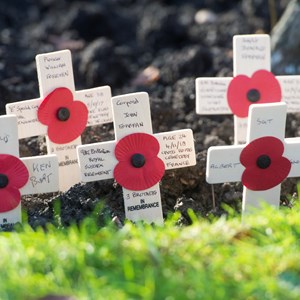 THOUSANDS of people across Leicester are expected to attend the city’s Remembrance Day events as the nation pays its respects to fallen servicemen and women.

This year’s events have an added significance as they come exactly 100 years since the signing of the Armistice which ended the Great War of 1914-1918.

On Saturday, November 10, Leicester Market will fall silent for its annual Remembrance commemorations. The service will begin at 10.50am, conducted by Reverend Karen Rooms from Leicester Cathedral, and will be attended by Deputy Lord Mayor of Leicester Cllr Annette Byrne. A bugler will sound the Last Post at 11am to herald two minutes of silence.

Flowers will be taken after the service and placed on the war memorial in Town Hall Square.

A parade made up of members of the armed forces, veterans and cadets will step off from De Montfort Hall at about 10.35am, travelling along Centenary Walk to the Arch of Remembrance shortly before the service starts at 10.55am.

Members of the public are requested to be in place by 10.30am. The parade route will be lined with poppies made by children from local schools, Guides and Scouts organisations, in commemoration of the anniversary of the First World War Armistice.

Children involved in making the poppies have been invited to attend and hold them as the parade passes by.

The Remembrance Day service will be led by the Bishop of Leicester, the Right Revd Martyn Snow. It will include a two-minute silence, observed at 11am.

Official wreaths will be laid at the Arch of Remembrance by the Lord Lieutenant of Leicestershire Mike Kapur OBE and Leicester Lord Mayor Cllr Ross Grant, along with representatives from local emergency services, military units and faith leaders.

In addition, Sir David Attenborough OM will lay a wreath, supported by his nephew Michael Attenborough CBE, along with Professor Paul Boyle CBE and The Rt Hon The Lord Willets FRS of the University of Leicester, to mark the 100th anniversary of the first donation made to fund the creation of the university.

Members of the public can also lay their own wreaths at the end of the ceremony.

People will be able to leave messages on a Wall of Remembrance in Coach Drive, at the railings near De Montfort Hall. Camouflage netting will be put in place, displaying information about local servicemen lost in the Great War, and visitors can add their own personal messages or name of a loved one to the tribute.

The nature of the event means roads in the immediate area will be closed. The car park at Granville Road will not be in use, but a very limited number of spaces will be available for disabled and blue badge holders. These must be booked in advance by emailing lord.mayor@leicester.gov.uk or by calling 0116 454 0020.

Following the service, members of the public can join the President and Vice Chancellor of the University of Leicester for the dedication of Centenary Square within the university grounds.

Finally, at 4pm, Leicester Cathedral will hold a special service marking the end of the First World War. The service, which is being run jointly by Leicester City Council and Leicestershire County Council, is open to the public to attend.

Leicester Lord Mayor Cllr Ross Grant said: “Remembrance Day is always a moment for reflection and contemplation on the sacrifice made by men and women of our armed forces in defence of their country.

“This year’s Remembrance Day events have the added poignancy of marking exactly 100 years since the signing of the Armistice which brought to a close the appalling bloodshed of the First World War. I am honoured to be attending and paying my respects.”

In recent months, war memorials across Leicester have been restored and repaired as part of the centenary commemorations.

The city council has also completed a project to clean and restore Leicester’s main war memorial – the Arch of Remembrance in Victoria Park – and the nearby Sir Jonathan North memorial park gates, ahead of the centenary.

The Arch of Remembrance is one of seven Grade I listed war memorials designed by Sir Edwin Luytens, who was also responsible for the Thiepval Memorial in northern France, upon which are inscribed the names of more than 70,000 missing Commonwealth servicemen killed between 1915 and 1918 who have no known grave.

For full details of Remembrance Day in Leicester, visit www.leicester.gov.uk/remembranceday