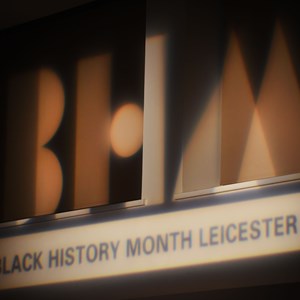 Events will be taking place across Leicester throughout October. Seen and Not Heard: Black Women will focus on female voices from the African and Caribbean communities of our city. Serendipity, co-ordinators of Black History Month in Leicester, chose the theme to put women’s voices centre-stage, and tie in with the 100th anniversary of some women in Britain receiving the right to vote.

2018 also marks sixty years since the founding of the West indian Gazette by Claudia Jones, and the thirtieth anniversary of the Sisters of the Long March tour of the UK, when a group of South African women raised awareness of the struggle against Apartheid.

This October, a diverse range of events will take place to mark Black History Month. Phoenix Cinema will play a selection of independent films including Winnie (10 October) and the rarely-played Hallelujah Anyhow (17 October).

On 11 October, Olympic legend and civil rights activist Tommie Smith will host a talk at De Montfort University Leicester (DMU), where he will discuss the impact of his world-famous black power salute on the podium at the 1968 Summer Olympics. Everyone is invited to join panelists Michelle Gayle, Karen Salt, Kennetta Perry, Bertha Ochieng and Rachael Young, who will come together for BlackChat: Women Talk, to discuss representation of Black women in arts, media and politics (18 October, CURVE theatre, Leicester).