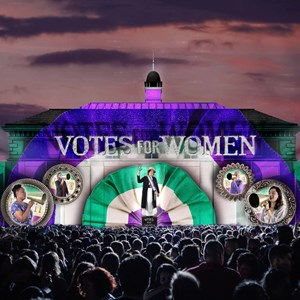 A YEAR-LONG celebration marking the centenary of the first British women getting the vote will culminate in a spectacular finale in Leicester next spring.

The story of the suffragette Alice Hawkins – the shoe factory machinist who led the women’s suffrage movement in Leicester in the early 1900s – will be brought to life in a stunning event that will use large-scale projection to create an unforgettable experience for spectators in the city’s new market square.

Video mapped imagery that appears to transform the building will be projected onto the rear of the Corn Exchange, using light and sound to help tell Alice’s story like never before.

Live performance and a 40-strong choir will also feature in the event, which will bring Leicester’s centenary celebrations to a close on Sunday 3 March 2019 – just a few days before International Women’s Day.

Deputy city mayor and heritage champion Cllr Adam Clarke said: “The UK-wide year of events commemorating the centenary of the Representation of the People Act started here in Leicester with the unveiling of the statue of Alice Hawkins.

“A year on from that ceremony, we’ll be returning to the new market square – close to the site of so many of Alice’s public speeches – to mark the end of the centenary year with this spectacular event.

“With International Women’s Day taking place on 8 March, it’s fitting that our final event in Leicester will honour not just Alice, but everyone who challenges inequality in our society.”

The free event – supported by funding from the Government’s Centenary Cities fund – will be repeated three times on the evening of Sunday 3 March, with each performance lasting 30 minutes.

Inspired by Alice’s life, the show will also focus on the growth of the suffragette movement and the legacy of the suffragettes’ fight for equal rights, with clips featuring women and girls from present-day Leicester bringing the story right up to date.

Shared Space & Light – the company behind the spectacular Lighting of the Torch Ceremony for the 2012 Paralympic Games, as well as amazing installations at Durham’s world-class Lumière Festival – have been brought in to create the event for Leicester.

It’s the first time the company has worked in Leicester – and company director Giles Thacker is looking forward to it.

“Leicester’s new market square is the perfect location for our large-scale projection,” he said.

“I urge people to save the date in their diaries now, because this will be a unique experience in the heart of the city centre that they won’t want to miss!”

Admission to the event will be by wristband, which will be available – free of charge – from Visit Leicester on Gallowtree Gate from early next year.

Called ‘Always and always facing toward the Light’ – the motto of the Leicester suffragette movement – the event will be produced by Leicester City Council in partnership with Big Difference Company.

The event – which will be the first major event to take place in the new market square following the completion of works to the rear of the Corn Exchange – is part of a programme of events supported by the Government’s Centenary Cities fund.

Since February, when the 100th anniversary of women’s suffrage was commemorated in Leicester with the unveiling of a statue of Alice Hawkins, a programme of talks has been taking Alice’s story to children at schools across the city and the county, while around 500 children took part in a centenary event in Leicester’s new market square in July.

‘Alice in Her Shoes’ – a theatre-piece inspired by Alice’s life – returns to Leicester’s Curve theatre on 25-26 October, while the Suffrage Flag, which is touring the UK as part of the Civil Service’s commemorations of the centenary, will be in Leicester on Friday 26 October.

And a brand new exhibition – Alice Hawkins and Votes for Women! – featuring memorabilia from Alice’s life opens at Leicester’s New Walk Museum on Saturday 27 October. A range of talks and events will support the exhibition and admission is free of charge.

Educational and celebratory events in Leicester, inspired by the life and work of Alice Hawkins, are supported by Leicester City Council and a Centenary Cities grant of £189,500.