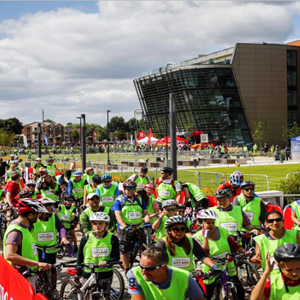 A CITY cycling festival has been nominated for a tourism award.

Ride Leicester, a two-week festival that takes place in the city every summer, has been nominated for Favourite Free Festival/Event in the Leicestershire Promotions 2018 Hospitality & Tourism Awards.

Organised by Leicester City Council with British Cycling, this year’s Ride Leicester festival took place from 11-26 August. It was also supported by cycling organisations from across the city.

The festival kicked off with the Castle Classic, which brings professional cyclists to the streets of Leicester for an exciting kermesse-style race on the city’s streets.

It also encompassed HSBC UK Let’s Ride Leicester – a mass cycle ride round the city centre on traffic-free streets, attended by thousands of people. Along the route – which included cycling through the King Power Stadium – participants got the chance to take part in bike-related events and activities including mountain bike shows, junk-art bikes, bike try-outs, rickshaw rides and giveaways from cycling, health, sports and arts projects across the city.

Cllr Adam Clarke, deputy city mayor for environment and health, said: “The Ride Leicester festival is a well-deserving nominee for this award. Having just celebrated its fifteenth year, it’s a very well established event that grows year on year and has clear goals in getting people from all backgrounds and areas of the city involved in cycling. It helps us to promote sustainable transport and encourages people to get active, but most of all it’s about having fun and celebrating cycling.”

Janet Hudson, national events lead at British Cycling, said: “This is a brilliant festival. With the involvement of more than 50 partner projects, it demonstrates that we can transform Leicester into a great cycling city. We have exciting plans for 2019 we’re inviting organisations across the city to get involved.”

The Ride Leicester festival team will find out if they’ve won at an awards ceremony on 29 November.