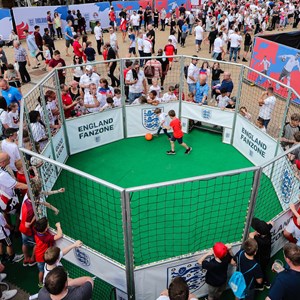 LEICESTER is set for a football fiesta on and off the pitch next week when the city hosts England v Switzerland at the King Power stadium.

The city council has announced that Jubilee Square will be hosting an England Fanzone during the build up to the England v Switzerland International Match at the King Power Stadium on Tuesday 11 September.

The council is working with the Football Association to deliver the fanzone, which will run from 12pm to 7pm, leaving fans time to get to the stadium or find a TV for kick-off at 8pm. The Fanzone will be open to the general public and fans won’t require a ticket to enter.

Visitors to the England Fanzone can expect fun and games on stage from hosts Cheeky Sport, live music will come from upcoming guitar band Y.O.U.N.G, and there’ll be pre-match punditry and analysis from Tony Cottee, former Leicester and England star, and Bruno Berner, former Leicester and Switzerland player.

Football freestylers will be showing off their incredible skills as they roam the Fanzone, and visitors will be able to take on them or their friends in the inflatable England Panna Pitch.

Street food and a licensed bar will be on offer in the Fanzone, and Leicester’s local bars and restaurants are just a few steps away.

Leicester’s City Mayor Peter Soulsby said: “We look forward to welcoming the England and Switzerland teams and their fans to Leicester on Tuesday. They can be sure of a very friendly welcome, and we hope they get to see some of the city as well as enjoy a great match.”

It’s the second time the King Power Stadium has hosted a senior England international, with the last bringing a 2-1 friendly victory over Serbia and Montenegro in June 2003.

Tickets for England v Switzerland are available from TheFA.com/Tickets