Leicester one of ten areas to get share of £840m fund 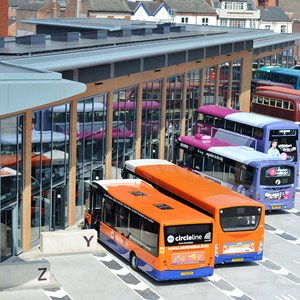 LEICESTER is one of only ten areas set to receive a share of the Government’s £840 million Transforming Cities Fund.

Over the next four years, the new allocation of funding will be used to improve transport links: increasing access to jobs and helping to ensure businesses have the infrastructure they need to thrive.

The city council put in the successful bid with the support of the county council. It focuses on improving the city’s cycleways, bus corridors and transport hubs.

The council will now receive an initial £50,000, as well as support from the Department for Transport, to develop its case for investment.

The Government will then consider the strength of the completed proposals from all ten areas - looking at their impact on improving connectivity, supporting employment and driving up productivity - before making their final funding decision.

While the ten areas finalise their proposals, £60 million from the Fund will be made available over the next year to share across the transport schemes. This will be aimed at tackling some of the most pressing challenges faced by communities.

Leicester’s City Mayor Sir Peter Soulsby said: “The Government is looking for ambitious and innovative proposals to take forward and we have a track record of delivering these in Leicester.

“Through our Connecting Leicester programme we have already made a major investment into the city’s transport network and infrastructure and this work is ongoing.

“A share of the Transforming Cities Fund will enable us to create new cycleways, including taking them out to neighbourhoods; to improve key bus routes, such as those between the city centre, existing neighbourhoods on the edge of the city and new growth areas such as Ashton Green; and to improve the train and bus stations and the links between them.”

Deputy City Mayor Cllr Adam Clarke said: “This new funding would allow us to build on the major investment already being made across the city to encourage more people to walk, cycle and use public transport. This is not just good for the economy, it has clear health benefits, helps cut congestion and plays an important part in improving the city’s environment as a whole.”