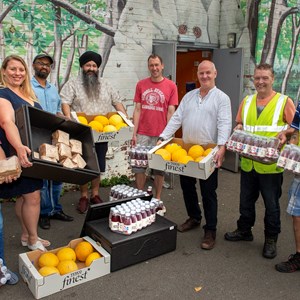 OVER 30,000 free lunches were given to children in Leicester this summer as part of a scheme to help beat holiday hunger.

Initiated by Feeding Leicester – a partnership of local organisations and charities including the city council, Action Homeless and Fareshare East Midlands – the scheme provided free healthy midday meals to hundreds of children at holiday clubs during the school’s summer break.

Six holiday clubs running at community centres and churches in the city were able to serve over 6,000 free meals to their children over the six-week period from mid-July.

In addition, almost 25,000 free packed lunches were handed out at local adventure playgrounds over the same period.

This is more than doubles the amount of free meals given out last summer.

The scheme was part of a national initiative to make holiday food and fun available to children and families around the country. It was aimed at families that struggle to get a proper midday meal without the help of free school meals.

Leicester was one of eight cities to take part in the programme and received £28,000 of Government funding to support the local holiday clubs.

Cllr Sarah Russell, deputy city mayor for children, young people, said: “It’s estimated that around 3 million children in the UK were at risk of going hungry during the recent school holidays.

“The length of the long summer break can hit families particularly hard but the level of demand this year suggests that families are struggling all year round.

“We’ve seen a much greater take up of the free fun and food on offer at our holiday clubs this summer and more children than ever have been given a free meal as part of this year’s scheme.

“It’s been a tremendous effort and I want to thank our partners and all the fantastic volunteers that helped prepare and deliver thousands of healthy meals through the summer.

“We will be working with our holiday hunger partners to see whether this important work can be extended to cover all schools holidays.”

Simone Connolly, Director of FareShare East Midlands, said: “It was a huge challenge to source and supply enough food to make 30,000 meals but the challenge was absolutely, without doubt, worth it.

“Over 30,000 children are living in homes where income is limited and it’s those children whose health will suffer as a result of lack of nutritional food. Our aim was to supply not only essential food but food that was of good nutritional content so that the children can go back to school healthier and happier.

Eilidh Stringer, funding and communications manager at Action Homeless, said: “This project simply wouldn’t have been possible without the dedication of volunteers so we’d like to pay tribute to their hard work and commitment.

“There is still much more to be done in tackling the issue of holiday hunger but the 2018 programme signals a big step in the right direction.”

A thank you reception for the dozens of volunteers that helped with this summer’s holiday hunger clubs will be held later this month.