Get in the swing at this year’s Riverside Festival 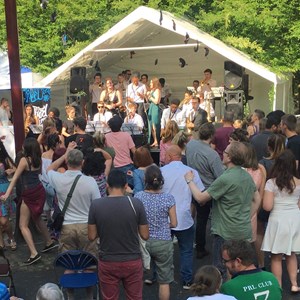 VISITORS to this year’s Riverside Festival will be able to get into their groove in a programme of jazz and swing music taking place throughout the two-day event.

Swing dancers, jazz performers and soul musicians will be taking to the stage in the Broken Records Swing Festival, which is taking place in Castle Gardens as part of the Riverside Festival, on June 1 and 2.

A line-up of swing bands and big bands will provide the soundtrack for a programme of dance classes taking place around the Maypole in Castle Gardens throughout the weekend, where participants will be able to try out their new moves.

Saturday's sessions take place from 12pm to 6pm, and will feature dance classes followed by live performances in the same style, including the Swingaree Dancers and Dance Leicester Lindy Hop, with music from KGB Jazz, The Citizens of Swing, Syston Swing Band and the DMU Jazz Band.

On Sunday, the action takes place from 12pm to 5pm, and features performances from the Loughborough Swing Society, Leicester University Swing Society, RM Jazz, guitarist Gareth John and the best of soul from Groove and The Bathtub Pings, with a finale by the University of Leicester Big Band.

This is the second year during which the Riverside Festival has featured the Broken Records Swing Festival, run in conjunction with city music venue The Shed.

The event is part of a wide programme of activities and attractions aimed at all ages and tastes which forms the Riverside Festival – the city’s biggest free family-friendly festival, and a key part of summer in Leicester.

The Riverside Festival is run by Leicester City Council and brings alive Bede Park, the Mile Straight of the River Soar, Castle Park and Western Boulevard, with a combination of live street performances, fun on the river, a funfair, riverside art and a bustling street market.

Leicester City Council senior festivals and events officer, Theo Markham-Crew, said: “We’ve got a fantastic line-up for this year’s Riverside Festival, which has established itself over the years as a really popular family event.

“The combination of events and activities taking place means it is really suitable for all ages and tastes. The Broken Records Swing Festival proved to be a huge hit last year with music and dance fans of all abilities, and I’m delighted that it is back for another year.”

For more details of the Riverside Festival, visit Leicester.gov.uk/festivals or visitleicester.info