Work completed on 1,000th city street to be covered by 20 mph zone 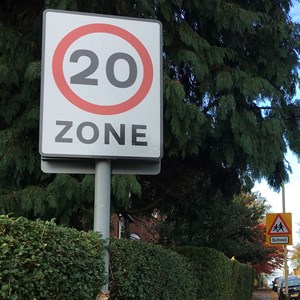 WORK has been completed on a traffic scheme which includes the 1,000th city street to be covered by a 20mph zone.

Leicester City Council has brought in the new 20mph scheme around Medway School, Highfields, which came into effect on Monday, April 8.

The scheme is the latest in a rolling city council programme of 20mph zones in residential areas, near schools and where requested by residents, which has been running since 2011.

It was among schemes approved late last year which would have taken the total number of streets to more than 1,000. Currently 60 such schemes cover over 200km (125miles) of road in the city – nearly a quarter of the city’s road network.

The speed-reduction work is designed to help improve road safety on key routes in residential areas near to schools, and in turn to help encourage more people to walk or cycle to school.

So far, over £1.3million has been invested or committed to city council-funded 20mph zones, as well as others funded by developers as part of local planning agreements.

Currently, of 114 schools across the city, about two-thirds (67.5 percent) are either within a 20mph zone or being considered for inclusion in one in the near future. A number of future 20mph zones have also been identified but not yet included on the current programme of work.

Department for Transport figures show that for every 1mph reduction in speed, the frequency of accidents drops by five per cent.

Figures for the scheme covering Knighton Lane East show among the biggest drops in speed – average speeds have fallen from 26.2mph to 15.7mph since the introduction of road humps, speed cushions and a designated 20mph zone in 2017.

Similarly, the scheme bringing speed cushions and a 20mph zone to Keyham Lane has reduced speeds from 26mph to 21mph.

Leicester City Council’s director of City Highways, Martin Fletcher, said: “The roll out of 20mph zones has proved to be hugely popular, as is shown by the number of communities requesting them.

“We’ve been listening to residents who have requested road safety measures, and working to address any particular road issues brought to our attention by ward councillors across the city.

“The £1.3m investment we’ve made since 2011 on 20mph zones has helped to make residential streets across Leicester safer for drivers, pedestrians, cyclists and everyone who lives in those communities.

“In some cases, new schemes have been brought in to extend or join together previously-approved 20mph zones, while in other places, a range of new traffic-calming measures have helped cut vehicle speeds on routes around schools, improving safety for everyone.”