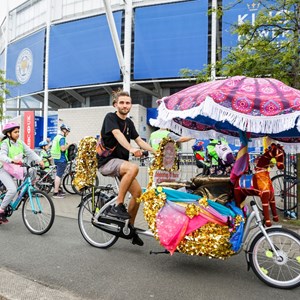 CITY centre streets will be closed to traffic and opened up for people to enjoy at the weekend, as HSBC UK Let’s Ride Leicester rolls into the city.

The mass bike ride is open to everyone and is free to join at any time and at any point on its route. It runs from 12-4pm on Sunday 25 August, with eight festival zones around the route open from 11am.

It’s a 6km, totally traffic-free route around the city, lined with cycling-themed events and attractions for the whole family.

The ride will be led off, at 12pm, from De Montfort University campus by two high-profile riders and one of Leicester’s favourite celebrities, Filbert Fox!

Along the way, the route will be packed with interactive, free and family-friendly entertainment, including stunt shows, bike try-outs and live music.

Music will include Ride Leicester’s ‘Broken Record Swing Festival’, which will be performing at the Dome on Jubilee Square.

At The Gallery on De Montfort University’s campus, riders can pose for a portrait photograph – individually or as a group – with Leicester-based international photographer Scott Couchino. A selection of the photos will be used to create a Ride Leicester Festival exhibition in 2020. Participants will get a copy of their own image and an invitation to the exhibition launch.

HSBC UK Let’s Ride Leicester is organised by the city council with support from British Cycling and HSBC, which sponsors a series of HSBC UK Let’s Ride events in cities up and down the country. Leicester’s event is one of the biggest, with thousands of cyclists expected to attend.

The event is also one of the highlights of the Ride Leicester festival, a two-week celebration of everything to do with cycling, which runs until the end of August.

Registering for the event is not compulsory, but if you want to sign up for advance information, maps, Let’s Ride bibs and offers from local bike shops, visit https://www.letsride.co.uk/events/leicester

Find out more about the wider Ride Leicester festival with a list of events at www.choosehowyoumove.co.uk/rideleicesterfestival2019/