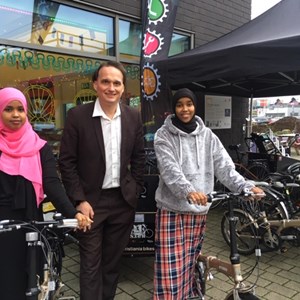 WOMEN in St Matthews are getting on their bikes thanks to a city council scheme that’s helped them to improve their cycling skills.

Since July, a group of around 20 women has been meeting at St Matthews multi-use games area (MUGA) for a free weekly cycling skills session aimed at women who have never been on a bike before, or who are returning to cycling after a long break.

The aim is to help introduce local people to the city’s extensive network of dedicated cycle lanes and quieter routes for cycling, as well as helping women who might never have cycled before to give it a try.

Funding for the project has come from money set aside to help improve air quality in urban communities. Bikes for the women to ride have been borrowed from the council’s stock of training cycles.

Transport development officer Janet Hudson, who has led the project, said: “We know that women are under-represented in terms of people who cycle regularly in the city, and non-white women are even more under-represented. In some cases, culturally cycling is just not something that is prioritised for women to take part in.

“It’s been fantastic to see these women fall in love with cycling and cycling and learn how to navigate around the city using the new cycling infrastructure. These skills will hopefully stay with them for life.”

Deputy city mayor Cllr Adam Clarke, who leads on environment and transportation, said: “We want to get as many people as we can riding around our city and making the most of the infrastructure we’re putting in to make cycling easier. If particular groups face barriers to cycling, then we need to help remove them, which is why it’s great to see this happening in St Matthews.

“We’re facing a climate emergency, so we all need to make better choices to improve air quality. Now that they can ride, we hope these women will be able to make cleaner, greener local journeys and will act as ambassadors for our bike share scheme, which is due to launch next year.”

To celebrate their new cycling skills, the women recently (on 19 Dec) rode to the Phoenix cinema for a special screening of Afghan Cycles, a feature documentary about a generation of Afghan women who are pedalling their own revolution, challenging gender and cultural barriers using the bicycle as a vehicle for freedom, empowerment and social change.

Patrick Welsh, marketing manager at the Phoenix, said: “It’s always a pleasure to welcome new people to Phoenix cinema. As a charity, we are open to all.

“We believe that cinema can both entertain and inspire. Afghan Cycles is a superb example of a film which does both these things - telling the amazing story of Afghan women embracing the power and freedom of cycling.”

The women now plan to help set up a group which will ride out from the Town Hall’s bike park for regular social rides, for female cyclists of all abilities.

For more information on cycling in Leicester, visit www.leicester.gov.uk/cycling or the Ride Leicester Facebook page.