Scheme to reduce waste left behind by students raises £68,000 for charity 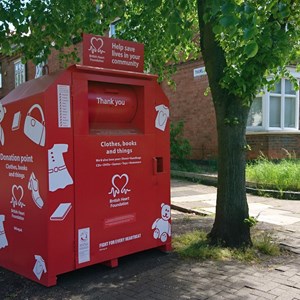 A CHARITY scheme, that encourages students to donate their unwanted items at the end of term instead of throwing them away, has saved an incredible 39 tonnes of items from being thrown away in Leicester.

The British Heart Foundation (BHF) ‘Pack for Good’ scheme ran for its second year this summer, collecting clothes, books, kitchen equipment, electronics and other unwanted items rather than see them thrown out when students leave rented accommodation for the summer.

Working closely with Leicester City Council to target the most walked routes between student houses and the city’s two universities, the charity placed seven red donation banks around the city from May until September.

Donations collected have helped to create about £68,000 in sales for the local BHF charity shop.

The success of the campaign has taken everyone by surprise.

Jodie Angold, Leicester City Council waste management development officer, said: “In 2018, we collected two and a half tonnes with the scheme. This year we hit that amount after just a couple of weeks. To collect 39 tonnes in total is amazing and has exceeded anything we could have expected.

“We’d like to say a huge thank you to everyone who used and supported the scheme.”

Emma Cunnington, university account executive from British Heart Foundation, added: “These figures have outperformed our expectations, and the quality of donations coming through was brilliant. The local shop has been thrilled. We are so grateful to all the students who donated through this scheme. Every item sold will help us raise vital funds for life saving heart research.”

Cllr Adam Clarke, deputy city mayor for environment and transportation, said: “This is an excellent scheme and I’m really pleased that it has been so successful this year.

“It’s a really good way for students to get rid of their unwanted items responsibly, charitably and with minimum fuss.”

The scheme forms part of the work the city council does to support students in using the recycling services offered in the city.

Flyers and posters are issued via letting agents and halls of residence when the students move into their properties. Moving out packs are then sent to students in houses towards the end of term with advice on leaving Leicester without leaving a mess.

To find out more about recycling in Leicester, visit www.leicester.gov.uk/recycling