Something for everyone at Leicester's ice rink this Christmas 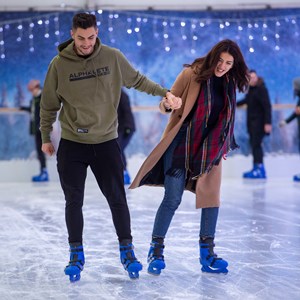 FOOTBALL fans, Bollywood enthusiasts and anyone who loves dressing up in a Christmas costume can look forward to some special events taking place at Leicester’s Christmas ice rink this month.

The first themed session takes place on Monday (16 December), when BBC Radio Leicester’s Ian Stringer will host his Football Forum programme, live from the ice rink in Jubilee Square. Ian will be joined by former Leicester City star Matt Piper and other special guests to chat about football and – maybe – enjoy a spin on the ice.

The session takes place between 6pm and 7pm on Monday.

Next Thursday (19 December), some of the best Bollywood tracks around will provide the soundtrack for the 7pm skating session.

BBC Radio Leicester’s Kamlesh Purohit and Shruti Chauhan will present Bollywood Tamasha on Ice, with music, fun, and a family skating ticket up for grabs for the best Bollywood skater.

And then on Saturday 21 December and Sunday 22 December, the build-up to Christmas continues with a crazy Christmas costume competition.

Any skater wearing a great Christmas jumper, a Frozen costume or a full Santa suit could win a pair of tickets for another session on the ice. A pair of tickets will be awarded at the 10am, 11am and 12 noon skating sessions on both days.

The final special session of the year takes place on Monday 23 December, when Leicester City mascot Filbert Fox puts his giant skates back on to show off his moves on the ice.

Skaters can join Filbert on the ice from 6pm-9pm on Monday 23 December.

Tickets for all the themed sessions can be booked via Leicester’s dedicated Christmas website, www.christmasinleicester.co.uk, from the Visit Leicester information centre on Gallowtree Gate or from the ice rink ticket office at BBC Radio Leicester.

Standard rates for adult skaters are £10, with tickets for children (aged 16 and under), senior citizens and students priced at £8.50.

Discounts are available for groups of four or more people, so a family of four will be able to skate for £34.

Anyone skating between 11am and 4pm on Mondays to Fridays until 20 December – the off-peak period before the schools break up for Christmas – can save £1 on standard prices.

Skating aids for young children – in the shape of penguins and seals – are available and can be booked in advance online or hired on the day at the ice rink, subject to availability.

Wheelchair users can join in the fun on the ice at any session at any time.

Skating starts at 10am each day (11am on Mondays to Fridays until 20 December), with the last session of the day starting at 8pm.

Detail of all events taking place in Leicester this Christmas are available at www.christmasinleicester.co.uk.

Summary of events in Leicester this Christmas:

From 10am daily (11am on Mondays to Fridays until 20 December) until 5 January. Last skate: 8pm. Closed Christmas Day and New Year’s Day.

Until 22 December: Santa in the Square. New Market Square

Visit Santa in his snow-covered grotto, every day until 22 December. Free admission – and free small gift for every child.

Strike a pose at LightWeight, a giant shimmering globe featuring live animation, every day until 21 December. Presented by BidLeicester.

Enjoy festive food and drink at Leicester’s German-themed outside bar.

Open daily from 10am-9pm until 28 December

Book your tickets for Leicester’s real ice rink. Choose from a wide range of Leicester-themed gifts, including gorgeous hand-painted baubles and Christmas cards.