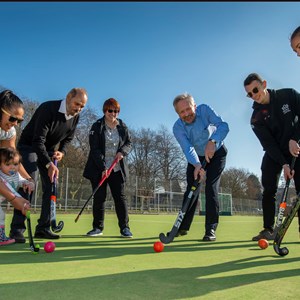 LEICESTER Hockey Club – one of the most successful women’s hockey clubs in England – is set to move back to the city of Leicester after 10 years away.

The city council will welcome the club back to Leicester by leasing it its facility at St Margaret’s Pastures – providing the club with a home they can invest in and upgrade, while ensuring that the sports centre continues to be available to the clubs and groups who currently use it.

With the security of a 25-year lease behind them, Leicester Hockey Club will have access to funding that will allow them to upgrade the facility, including replacing the Pastures’ existing sand-based pitch with a water-based pitch that’s suitable for top-flight hockey.

And with ambitious plans to grow the grassroots game by offering junior and adult coaching programmes at St Margaret’s Pastures, as well as a range of multi-sports, health and fitness sessions, the club’s return to the city is good news for Leicester.

City Mayor Peter Soulsby said: “Our sports clubs not only raise the profile of Leicester nationally, but they also play an active role in the communities where they’re based.

“Thanks to this initiative, Leicester Hockey Club – which is such a major force in women’s sport – will soon be back where it belongs, joining Leicester City FC, the Leicester Tigers, the Leicester Riders and Leicestershire County Cricket Club back home in the heart of the city.

“The club have demonstrated to us that they have the skills and expertise to run St Margaret’s Pastures, both as a venue for top flight hockey and as a valuable community leisure facility, and I hope that their return to Leicester will bring them success.”

The lease agreement between the council and the club will run for 25 years, with a peppercorn rent payable for the first three years, rising to £10,000 in year four and £20,000 in year five. The rent will be reviewed every five years, with the hockey club taking on full liability for the building and its maintenance from day one.

The lease also provides reassurance for the teams that currently use the facility, stipulating that its football facilities must be retained and that hire charges should be unchanged for the first 12 months.

Currently, the Leicester Panthers hockey club, more than 30 football teams and a handful of other groups regularly use the sports centre, and all of them have been notified of the city council’s intention to transfer the day-to-day running of the centre to Leicester Hockey Club.

For most of the football teams, there will be no changes to their bookings, although those who currently use half of the main sand-based pitch for training will move to one of the 5-a-side pitches when works to replace the main pitch get under way.

The Leicester Panthers hockey club will continue to use the old sand-based pitch until work gets under way to install the new pitch, when the teams will be helped to find alternative accommodation elsewhere.

Once the new water-based pitch is in place, Leicester Hockey Club will work with the clubs to agree a future programme of use.

The hockey club plans to use its status as a community interest company to apply for funding from a number of bodies to help finance the improvements it wants to make – and the Pastures will also benefit from £350,000 of Section 106 funding that the city council has earmarked for the facility.

Deputy city mayor Cllr Piara Singh Clair said: “The investment that will be made in St Margaret’s Pastures will benefit everyone who uses the sports centre.

“The high-end water-based pitch planned for the Pastures will be one of just three such facilities in the county, providing hockey clubs in Leicester with the opportunity to play on a superb playing surface.

“By working with Leicester Hockey Club, we want to support the development of the game in Leicester, while ensuring that the facilities at St Margaret’s Pastures continue to be open to the public.”

Leicester Hockey Club has been playing its home games at Leicester Grammar School in Great Glen since 2009. To mark its move back to city, the club has announced that it will be refreshing its brand. Reflecting the club’s new relationship with the city, it will change its name to ‘Leicester City Hockey Club’.

Chair Carol Johnson said: “After 10 years away, we can’t wait to move back to the city.

“Having a home in the heart of the city will make it easier for us to attract new players, as well as new fans.

“We’ve got lots of plans for the future, including expanding our men’s section, a renewed focus on grassroots hockey and building a close relationship with local schools.

“We also want to improve and extend the pavilion, update the catering and changing facilities, ensure the football pitches are maintained, and invest in lighting, fencing and security to provide a community-based multi-sport facility with hockey at its heart.

“We’re looking forward to returning to Leicester and would like to thank the city council for this opportunity.”

Subject to the completion of the lease, Leicester Hockey Club is due to take over the day-to-day running of St Margaret’s Pastures from 1 April 2019.