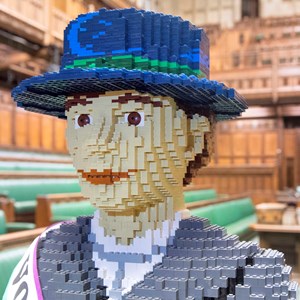 A LIFE-SIZED suffragette made of LEGO will be installed at Leicester’s New Walk Museum this weekend.

The 5ft 6ins-tall model – named ‘Hope’ – was made by the UK Parliament as part of last year’s programme of events marking 100 years of women’s suffrage.

Hope is now on her way to Leicester, where she will pose for selfies and – until 24 February – help signpost visitors to the museum’s temporary exhibition about Alice Hawkins and the suffragette movement.

Weighing in at 94.5kg and made of around 35,000 individual LEGO bricks, Hope is set to become a popular attraction at the museum this spring.

“The work that’s gone in to creating the model out of LEGO is quite extraordinary, and I’m sure people will enjoy seeing the detail close-up when they visit the museum from Saturday.”

The LEGO suffragette will be in the entrance hall of New Walk Museum from Saturday 16 February.

As part of the museum’s half-term activities, there will be a free LEGO event on Wednesday 20 February.

Drop in any time between 11.30am and 3pm to make your own suffragette – or whatever else you’d like to create – out of LEGO.

Alice Hawkins & Votes for Women – the exhibition about the suffragette movement – continues at New Walk Museum until Sunday 24 February.

Hope, the LEGO suffragette, will be at the museum until Sunday 28 April.