Walking and cycling thrive five years on from flyover demolition 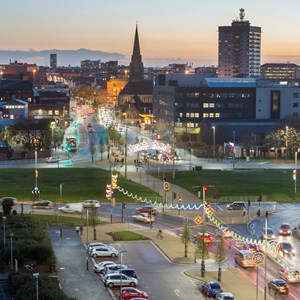 THOUSANDS more cyclists and pedestrians are using a route connecting Belgrave to the city centre five years on from the demolition of the crumbling flyover which dominated the area.

Belgrave Flyover was demolished in 2014, and the ageing, 1970s concrete structure replaced with a roundabout, landscaping, cycle lanes and pathways which created a far more welcoming gateway into the north east of the city.

The demolition took place in phases over nine weeks from February to April 2014, using heavy machinery to remove the road surface and the bridge spans, before clawing away at its reinforced concrete supports.

Now, latest traffic and travel figures show that the number of pedestrians and cyclists using the new roundabout, footpaths and cycle lanes at the site have risen dramatically, while traffic has continued to flow on the redesigned road and use the new parking spaces created.

Measurements taken between 7am and 7pm in April, May and June last year showed there are regularly between 4,000 and 5,000 people walking and 300 to 500 cycling across the new roundabout each day.

Despite concerns at the time over the impact the removal would have on the road network, traffic has continued to flow with the number of cars and lorries using the route having fallen by just one percent.

The new pedestrian and cycling facilities, road crossing points and routes linking the Golden Mile, Abbey Park and the arena with the city centre are part of the City Mayor’s wider Connecting Leicester work to improve connections between key business, residential and development areas of Leicester.

City Mayor Peter Soulsby said: “The removal of the Belgrave Flyover has had a dramatic effect on the look and feel of this area, and has hugely improved the wider public realm, as well as creating a far more pleasant route into the city.

"When it was built in the 1970s, the flyover was originally meant as the first phase of a two-way dual carriageway through the Belgrave Road area, but this was never completed due to opposition from new local businesses in the area, so the old flyover never really operated as it should have done.

"It had dominated the area making it feel unfriendly and a dark, unsafe environment, and was also in need of major maintenance which would have been a very costly exercise.

"There were some concerns locally about the impact on traffic of removing the flyover, but the major congestion feared has not happened, and it’s very encouraging to see so many pedestrians and cyclists are now using this safer, more open route.

“The removal has stimulated development in the area and provides a fantastic backdrop to the annual Diwali festivities.

The demolition work followed a public consultation with businesses and residents in the surrounding area, and was carried out in a phases by local firm AR Demolition.

Two members of the public were also selected at random to start the demolition process formally.