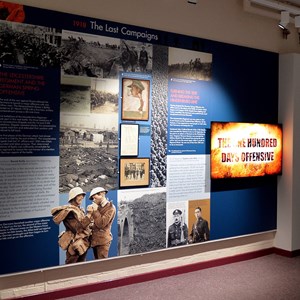 THREE pop-up exhibitions produced to commemorate the centenary of Armistice Day are now available to hire.

Based on the three exhibitions created by the city council’s museums service as part of the Leicester Remembers series, the six-panel displays can be hired – free of charge – by schools, places of worship, clubs or community groups.

The first exhibition looks at the first two years of World War I, the second focuses on the Battle of the Somme in 2016, while the third display – From the Trenches to the Twenties – covers the final year of the war and its aftermath.

Curator Philip French said: “These mini displays capture the key points of the Leicester Remembers exhibition series and are available to hire, free of charge.

“Schools that are studying the First World War, or any group that’s interested in the war and its aftermath, are welcome to borrow these panels and display them on their own premises.”

Any group interested in hiring the mini exhibitions should contact Philip French at Newarke Houses Museum on 0116 454 6600.

From the Trenches to the Twenties – the final exhibition in the Leicester Remembers project – continues at Leicester’s Newarke Houses Museum until Sunday 24 February.

The exhibition looks at the final year of the war, the aftermath of more than four years of horrific conflict, and the Spanish flu epidemic that continued to kill millions around the world after the war had ended.

Focusing on the impact of the war on those who fought in it and those who remained at home, the exhibition also charts the Leicestershire Regiment’s role in major campaigns, including the German Spring Offensive and the breaking of the Hindenburg Line.

As part of the exhibition, the First World War trench scene – the most popular exhibit at Newarke Houses Museum – has been refurbished, thanks to funding from the Heritage Lottery Fund.

Deputy city mayor Cllr Piara Singh Clair said: “Since 2014, the Leicester Remembers project has been giving people the chance to understand the impact that the First World War had on those who fought in it – and how it affected those who remained at home.

“This final exhibition of the trilogy looks at the last year of the war, giving us all an opportunity to reflect on the horrors of war and remember those who sacrificed so much.”

The city council is grateful to the Royal Tigers’ Association and the Heritage Lottery Fund for their support with the Leicester Remembers project.