Big names in music and comedy announced for City Festival 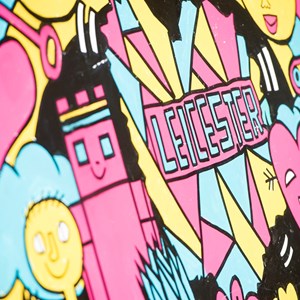 THE first artists have been announced for a stunning programme of music, comedy and entertainment at the heart of Leicester’s City Festival.

The 2019 City Festival takes place over seven fun-packed days from August 19 to 25, including a street art programme themed on ‘Out of this World’, in commemoration of the 50th anniversary of the Apollo Moon landings in July 1969.

For the first time, the centrepiece of the city council-run festival will be a huge purpose-built transparent venue known as The Dome in Jubilee Square, which will be the focal point for a programme of daytime family-friendly activities throughout the week, before transforming into a stunning performance space for live concerts and shows in the evenings.

BC Camplight will play at The Dome on Monday, August 19, with doors opening at 6pm. Tickets cost £13.75 (including booking fee).

The following evening on Tuesday, August 20, British Sea Power play at The Dome with doors opening at 6pm. A support act is yet to be confirmed. Tickets cost £16.50.

Live stand-up comedy will take centre stage at The Dome on Thursday, August 22 and Saturday, August 24, with a packed programme of local and national names.

Lloyd Griffith, who has made his name as presenter and resident comedian on the Soccer AM sports show, will be performing on Thursday, August 22. There will be a local comedy showcase from 7pm, followed by a nationally-recognised mixed bill at 8.30pm, at which Lloyd will perform. Tickets for the 7pm show cost £6.60, with tickets for the 8.30pm show priced at £13.20.

Tickets for the gigs are now on sale from ticket site Gigantic on: www.gigantic.com/leicester-city-festival-tickets

Further headline acts and a fun-packed programme of activities for families of all ages are due to be announced in the coming weeks.

Leicester City Council, which is running City Festival, is working with local venues Firebug and The Cookie on the music programme, while comedy is being hosted in collaboration with the Big Difference Company, which is behind the hugely-successful Leicester Comedy Festival.

Leicester deputy city mayor for culture, leisure and sport, Cllr Piara Singh Clair, said: “City Festival has become a popular part of the city’s summer programme over recent years, but this is the first time that a fantastic programme of live music and comedy has been centred in the new Dome venue in Jubilee Square.

“It will provide a centrepiece for this year’s events, which as ever offer a fun-packed programme of activities for all ages.”

The 18-metre wide, nine-metre high Dome can accommodate 450 people, and will take four days to install and another day to dress.

The City Festival’s ‘Out of this World’ theme will celebrate all things relating to outer space and exploration with events across the city centre and a space-themed street art festival from Monday to Friday.

Jubilee Square will also host dazzling international street arts, stunning performances and interactive activities and games for the whole family. Visitors will be able to keep an eye out for intergalactic guests including giant insects and robots, while the evening live music and comedy shows will bring each day to a stunning finale.

More details of City Festival 2019 are available at: www.visitleicester.info