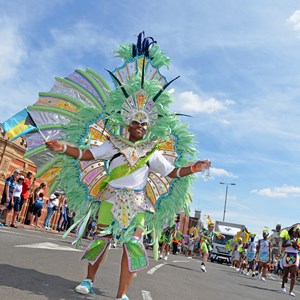 LEICESTER’S streets will come alive with the sights and sounds of the tropics this weekend for the city’s annual Caribbean Carnival.

The festivities are among the city’s biggest and most popular events, with thousands of spectators both watching the parade through the city and joining in the celebrations on Victoria Park.

Leicester Deputy City Mayor responsible for culture and leisure, Cllr Piara Singh Clair, said: “The Caribbean Carnival is one of the highlights of our summer calendar of events in the city. It’s a fantastic chance for thousands of people to celebrate Caribbean music, culture and food, and to enjoy the colourful parade through the city centre and festivities on Victoria Park.”

The event will involve a number of road closures and changes to bus stops on the day to allow for the procession to take place.

Buses will not operate along London Road between Victoria Park and the city centre from 12.30pm until late afternoon.

Buses that serve stops in Humberstone Gate East, Haymarket and the southern part of Charles Street will be diverted from around 2pm until the parade has passed through the city centre.

Haymarket Bus station will remain operational throughout the afternoon. Coach and bus services departing from St Margaret’s Bus Station will not be affected.

Park and ride services will continue to operate but service 303 will not serve Haymarket while the parade is in the centre.

Vehicles will not be able to access Leicester railway station during the road closure. Arrangements for Hackney carriages to and from the station will be via nearby Sparkenhoe Street and Conduit Street.

Details of the event are available online at www.visitleicester.info For further details of travel options to and from the city visit http://www.choosehowyoumove.co.uk/