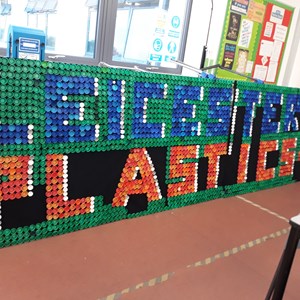 STUDENTS from Ellesmere College are kicking off a summer campaign to reduce litter in our waterways.

Kicking it to Plastics is a project being run by environmental rangers in the city council’s parks team, with support from Leicester City Football Club’s community trust. It follows the successful River Monster project last year, which saw a Loch Ness-style ‘monster’ sculpture created from waste plastic recovered from the city’s waterways.

This summer, the plan is to create a footballer sculpted from waste plastic, which will be on display on the water close to the King Power stadium from mid-August. Plastic litter will be collected from the waterways by the Leicester Environmental Volunteers, the National Citizens Service, football club volunteers and corporate groups over the course of the summer before being cleaned, sorted and transformed into art.

Ellesmere students are already working on the project by creating a scoreboard from more than 9,000 plastic bottle-tops they have been collecting from the homes of students and staff – highlighting how much plastic we all use, as they only took a few weeks to collect. The scoreboard will be placed next to the footballer later this summer, and will say ‘Leicester 1, Plastics 0’.

Deputy city mayor and lead on the environment Cllr Adam Clarke said: “One of the most visible and troubling signs of the climate emergency we’re all facing is the amount of plastic waste that is finding its way into water courses, eventually ending up in the ocean.

“This litter can also cause flooding, so it has the potential to have a huge negative environmental impact.

“We’re lucky to have lots of committed volunteers in Leicester who want to help, including young people from the National Citizens Service and the Leicester Environmental Volunteers, who work with our parks team to clear litter from rivers and waterways in the city.

“This project will see waste turned into art and taken out of watercourses where it can do so much damage. It’s an innovative way of highlighting and tackling the problem.”

Denise Drinkwater, outdoor learning instructor at Ellesmere College, said: “We have a long-established relationship with the environmental rangers at the city council and we’re delighted to be involved in this project. Over the past few months, more than 100 students have taken part in litter-picking on the river.

“By the end of the project each of the college’s 275 students will have been involved, either by collecting rubbish, bottle washing, making the board or sticking their bottle top onto the scoreboard. It has been a really valuable learning experience for our students, who have been using their art skills to create the scoreboard and learning about recycling and looking after the environment. We can’t wait to see the final installations on display this summer.”

Jamie Skinner, education manager at Leicester City Football Club’s Community Trust, said: “As an organisation we are really pleased to be working in partnership with Leicester City Council in supporting the Kicking it to Plastics project. Plastic pollution in waterways is a contributor to ocean waste, so this is a great opportunity to raise awareness of the issue and positively change behaviours around the recycling of plastic.”