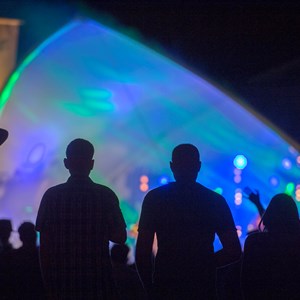 DE Montfort Hall’s leafy, tranquil gardens will see some of the country’s biggest names in rock, pop, grime, dance and classical music this month in a groundbreaking series of outdoor concerts.

The hall’s Gigs in the Gardens programme will for the first time ever stage seven huge concerts spanning two weekends, bringing to the city superstars such as Professor Green, Busted, DJ Pete Tong and the Kaiser Chiefs, as well as showcasing the best of the region’s up and coming new musical talent.

Gigs in the Gardens follows a £570,000 package of improvement work to the hall’s grounds to provide the infrastructure needed to accommodate such large outdoor events.

The first weekend of gigs sees grime stars including the gifted Mancunian Bugzy Malone, the rap and r’n’b infused Yxng Bane and chart-topper Wretch 32 taking to the stage, on Friday, August 16.

Saturday, August 17, sees Busted bringing their feelgood guitar pop songs to the hall, along with multi-million selling rapper and Glastonbury star Professor Green, and rock/pop trio Scouting for Girls who will bring their hook-laden jangle to the hall’s gardens.

Indie icons, national treasures, high-octane live band – call them what you want – the Kaiser Chiefs will be topping the bill on Sunday, August 18, with music from their extensive back catalogue of work. They’ll be joined by rock/power pop outfit the Vaccines, fresh from their own sold-out tour, and Birmingham rockers The Twang.

Expect to see some hands in the air, expect to hear people making some noise, because on Friday, August 23, bona fide dance music legends Groove Armada (DJ set), Pete Tong and Danny Howard will turn up the heat for a night of slamming beats and euphoric dancefloor classics.

Gigs in the Gardens will draw to a close on Monday, August 26, with a Bank Holiday family concert by the Bardi Symphony Orchestra. It will bring alive theme music from some of the greatest films of the age, including The Empire Strikes Back, The Mission, The Lion King, Pirates of the Caribbean and Harry Potter among others, culminating in a firework display finale.

Leicester City Council’s deputy city mayor for culture, leisure and sport, Cllr Piara Singh Clair said: “Gigs in the Gardens is a brand new idea taking place for the first time this year to make the most of the hall’s historic, leafy gardens and bring them to life with a summer programme of very varied live concerts through August.

“I am very excited about the acts we have appearing, and there’s a real mixture of genres to suit a wide range of tastes, from rock and pop through to grime and urban music, but also well-loved events like the Bardi Symphony Orchestra.

“It’s great to see that the investment we’ve made in improving the hall’s gardens over the last year or now mean it can handle major outdoor events like this more easily, and I hope they prove to be the first of many.”