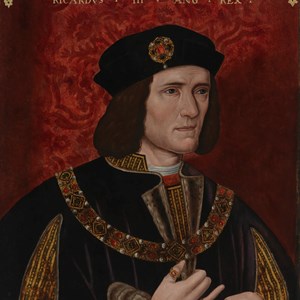 AN ICONIC portrait of King Richard III will go on display at Leicester’s New Walk Museum this week, thanks to the National Portrait Gallery in London.

The Gallery’s COMING HOME project is loaning 50 portraits of iconic individuals to the places they are most closely associated with – which means that the late 16th century portrait of Richard III by an unknown artist will be loaned to the city of Leicester from Saturday 8 June.

The portrait – which measures around 25” x 18” – shows a head and shoulder view of the king, who appears to be placing a ring on the little finger of his right hand.

Painted in oils on an oak panel, the painting is one of the primary portraits of King Richard III.

City Mayor Peter Soulsby said: “Since the remains of the last Plantagenet king of England were discovered and reinterred in Leicester Cathedral, there’s been huge interest in the story of King Richard III.

“The COMING HOME project will now give people in Leicester the chance to see one of the finest portraits of the king for themselves – and it’s a portrait that they will probably instantly recognise.

“This is a great opportunity to see the real thing - here, in the city where he’s buried – and we’re very grateful to the National Portrait Gallery for making this loan possible.”

“We hope that sending portraits ‘home’ in this way will foster a sense of pride and create a personal connection for local communities to a bigger national history; thus helping us to fulfil our aim of being truly a national gallery for everyone, in our role as the nation’s family album.”

The portrait will be supported by an exhibition created by members of the Roots Group, a group of volunteers formed with the support of the Journeys Festival international team. Made in partnership with the King Richard III Visitor Centre and Leicester Cathedral, the exhibition will also consider the king’s legacy to the city of Leicester.

The Very Revd David Monteith, Dean of Leicester, said: “This summer in Leicester we can pay respect to his remains at his tomb in the Cathedral, encounter the extraordinary story of his discovery in the car park at the Richard III Visitor Centre and come face to face with him in his portrait, as we try and piece together the true identity of the King.”

Iain Gordon, director of the King Richard III Visitor Centre, said: “The first thing our visitors see on arrival at the centre is a large-scale version of the iconic red portrait of Richard and so to have the original version on display in the city is a real honour. We will, of course, be encouraging our visitors to visit New Walk Museum to see the ‘real thing’.”

The portrait of King Richard III will be on display at New Walk Museum from Saturday 8 June until 22 September.

Joanna Jones, the city council’s head of arts, museums, festivals and events said: “We are delighted to be a partner in the National Portrait Gallery COMING HOME project and to host this significant portrait of King Richard III. We hope the painting will attract many visitors from the city and beyond and help make people more aware of the remarkable story of Richard III and his discovery in a Leicester carpark.”

In total, the COMING HOME initiative will see 50 portraits from the national collection travel to towns and cities across the UK.

A portrait of William Wilberforce – who led Britain’s campaign to abolish slavery – will go on display in Hull, the place of his birth, David Hockney’s Self-Portrait with Charlie will be shown at the Cartwright Hall Art Gallery in the artist’s hometown of Bradford, while a photographic portrait of Sheffield-born athlete Jessica Ennis-Hill will go on loan to Museums Sheffield.

COMING HOME is supported by the Department for Digital, Culture, Media and Sport, by generous contributions from The Thompson Family Charitable Trust, and by funds raised at the gallery’s Portrait Gala in 2017.